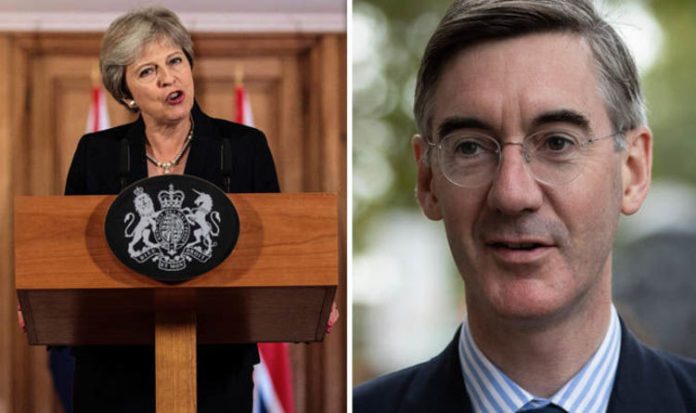 Tory Brexiteer Nadine Dorries called for the Prime Minister to resign or leave her soft Brexit plan behind.

The Mid Bedfordshire MP did not leave any room for doubt on her position on Mrs May.

When asked by the host of ITV’s Peston programme if she believed the Prime Minister should go, she said “yes”.

However, she conceded “there is a chance for Theresa May” if she abandons the Chequers plan.

Ms Dorries said: “My personal belief is that we need somebody who can invigorate the party, who can articulate the sunny uplands, who can tell us what all the great opportunities that are going to be there, we have a good positive Brexit.

“Theresa May is not doing that.”

The MP said the members of the hard Brexit-backing group would refuse to back the Chequers-inspired white paper if it arrived to parliament.

She said: “The Prime Minister needs to climb down and she needs to support a Canada plus free trade agreement.”

That would be the “only thing that can save” Mrs May, Ms Dorries added.

A Canada-style Brexit deal would take inspiration from the EU-Canada Comprehensive Economic and Trade Agreement (CETA), signed in October 2016 by Toronto and Brussels.

This trade deal removes 99 percent of customs duties on European exports to Canada and vice versa.

After seven years, all tariffs on industrial products will disappear completely.

And a large bulk of tariffs on agricultural products are also due to be removed.

Despite having struck a virtually free trade deal with the EU, Canada doesn’t pay into the EU budget has to abide by free movement laws and the rulings of the European Court of Justice.

The Prime Minister ruled out a Canada-style deal during her Florence speech in 2017.

But standing by the Chequers plan could be fatal to her leadership, according to Ms Dorries.

She said: “I think that if we don’t, I say it in sorrow because I was delighted when Theresa May was Prime Minister and I have been saying for many, many months to people, ‘trust her, she will deliver’.

Following last week’s unofficial summit in Salzburg with the EU28, Mrs May insisted the Chequers plan is the only viable solution for the UK.

In a statement released on Friday from Downing Street, Mrs May said: “Anything which fails to respect the referendum or which effectively divides our country in two would be a bad deal and I have always said no deal is better than a bad deal.

“But I have also been clear that the best outcome is for the UK to leave with a deal.

“That is why, following months of intensive work and detailed discussions, we proposed a third option for our future economic relationship, based on the frictionless trade in goods.”

The Chequers agreement will “maintain a common rulebook for all goods” with the EU, avoiding a hard border on the Irish island and striking a free trade deal with Brussels.