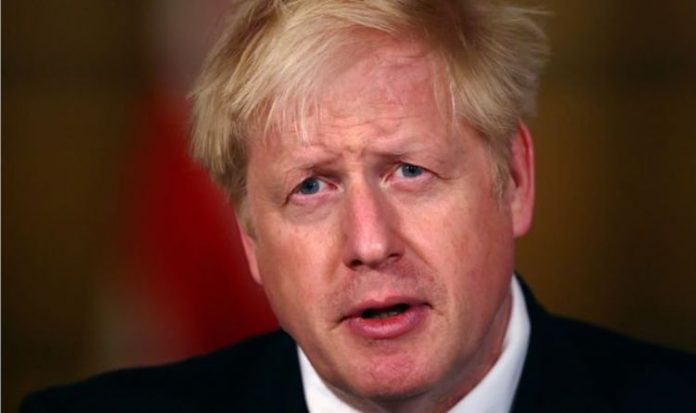 The two failed to break the deadlock on EU demands over access to British fishing waters and the UK accepting punitive level playing field measures but decided to ask their chief negotiators to have “one last throw of the dice”. It means that Lord Frost will meet fellow negotiator Michel Barnier this morning and talks will conclude tomorrow with another call between the PM and Ms von der Leyen. A source close to the British negotiating team said: “Basically, we are not budging. The EU will have to budge. They need to change their mandate. “If that does not happen by the time the call happens on Monday it will be finished.” It means that after four-and-a-half years of talks, the negotiations are going into their final hours.

And last night, Tory MPs lined up to tell the Prime Minister not to lose his nerve.

There had been hope that a deal would be reached last week but the talks hit a wall after the EU tabled last-minute demands deemed unacceptable by the British side. Those changes were pushed by French President Emmanuel Macron.

Mr Johnson, who has described himself as “the Brexit hardliner in the Cabinet”, was unwilling to countenance the demands. It was argued that they would have given the EU a decade to plunder British fishing waters and force the UK to accept state aid rules much tougher than the ones the EU members have to endure.

A source close to the talks said that the EU had responded to British compromises “with demands that in no way could be said to recognise that the UK is an independent country, and which would have effectively tied the UK’s regulations to the EU’s in perpetuity”.

According to the source, it became clear that the process had gone as far as it could at chief negotiator level and required political intervention, adding “the EU’s unrealistic mandate had reached its limits”.

Boris Johnson has made it clear he is unwilling to countenance the demands (Image: UK )

The PM spoke to Ms von der Leyen yesterday evening for an hour to try to unlock the process, and agreed that a small team of UK negotiators would travel to Brussels this morning.

They will work intensively to see if they can bridge the remaining gaps, notably on issues around the level playing field – which means sticking to some EU rules on a range of issues.

However, the source said that with little time left, “there is no doubt that this process may not end in agreement.

“It has not been helped by the fact that the EU only allowed the negotiations to focus on legal texts a month ago, as the talks should have been reaching their end.”

The source added: “This is the final throw of the dice.

“There is a fair deal to be done that works for both sides but this will only happen if the EU is willing to respect the fundamental principles of sovereignty and control.”

In a joint statement from Mr Johnson and the Commission President they admitted “significant differences” remain.

They added: “Both sides underlined that no agreement is feasible if these issues are not resolved.”

But the leaders continued: “Whilst recognising the seriousness of these differences, we agreed that a further effort should be ­undertaken by our negotiating teams to assess whether they can be resolved.”

The EU’s chief negotiator Mr Barnier said after yesterday’s phone call: “We will see if there is a way forward. Work continues tomorrow.”

And Ireland’s Taoiseach Micheal Martin hoped an agreement could be reached. He said: “I welcome the fact that negotiators will resume. An agreement is in everyone’s best interests. Every effort should be made to reach a deal.”

In his column for the Sunday Express, Leader of the House Jacob Rees-Mogg described Mr Johnson as “a statesman” and questioned whether the EU could meet the challenge.

And writing for the Sunday Express, former Brexit Secretary David Davis called on the PM to hold his nerve, saying the EU has more to lose from a No-Deal.

He said: “The EU sells the UK far more goods than we sell them.

“This means that if tariffs are imposed on imports such as cars, effectively a tax, EU states will be paying us a lot more money in tariffs than we will have to pay them. At this crucial time, the Prime Minister must stand firm and hold his nerve.”

He also blasted the EU for its attitude. “The EU have, from the outset, failed to negotiate in good faith.”

Former Tory leader Iain Duncan Smith said: “The worst possible thing for the Prime Minister to do would be to compromise. He is under no more pressure to do a deal than the EU, and he must stick to his guns.”

The intake of Tory MPs who swept away Labour’s red wall on a wave of “get Brexit done” a year ago are also concerned any surrender would have been catastrophic for them.

Alexander Stafford said: “A poll found that, by an overwhelming margin, people living in seats that switched from Labour will shy away from the Conservatives unless the Government delivers a deal that safeguards UK sovereignty.”

He warned: “If he backs down on Brexit his support in the party would be finished.”

But another Brexit campaigner, Peter Bone, said he always had faith in Mr Johnson.He added: “I have always been sure that if the EU offered a good deal he will take it. If they offer a bad deal he would walk away.”