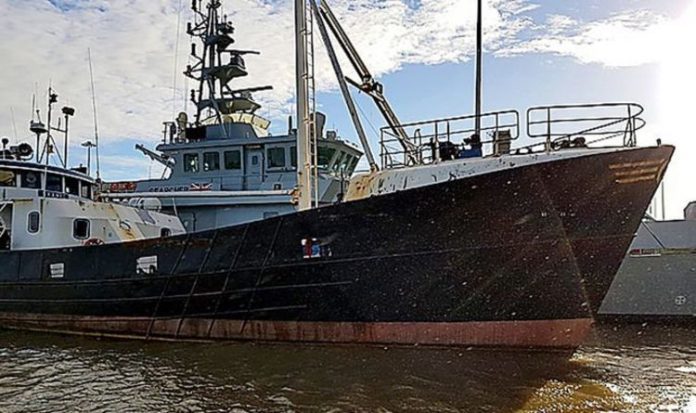 A 100ft fishing vessel, sailing from the Ostend area of Belgium, was intercepted by Border Force officers and taken to Harwich last month. Nearly 70 Albanian migrants were found on board. Home Secretary Priti Patel thanked the authorities and the migrants were charged with illegally entering the country. Some of them immediately pleaded guilty. But all charges were dropped by the Crown Prosecution Service on Wednesday as they “did not meet the legal case”.

It is believed to be because they had not physically entered the country when arrested.

We can reveal that one of those on the vessel and charged was a man with a murder conviction.

He had been released from a maximum security prison in Albania in January after completing a 15-year sentence for shooting a woman at her home in 1997 following an argument.

Her eight-year-old daughter witnessed the shooting.

It is understood the man, who the Sunday Express is not naming, is now in an immigration removal centre. It is not known if he has applied for asylum. The Home Office declined to confirm whether it was aware of his conviction.

Although the death of the woman, in her late-20s, was recorded as a murder it was not properly investigated at the time as Albania was going through a period of unrest with a dire lack of police resources.

Prosecutors reviewed the case in 2006 and the man was charged with the killing after the body was exhumed.

He was initially found not guilty in 2008. But, at an appeal court in 2009 that verdict was overturned and he was sentenced to 15 years in the top-security Rrogozhina prison. He appealed but five judges insisted the conviction was sound.

Alp Mehmet, chairman of Migration Watch UK, which campaigns for stricter border controls, described the fact a convicted killer sneaked into the country as shocking.

He said: “Sadly, these events seem to show that the interests and safety of the law-abiding public are less important than the questionable rights of those whose awful crimes should dictate their removal.”

A Home Office spokesman said: “We are disappointed that the proceedings against the 69 people charged with illegal entry will be discontinued, and we are working with the CPS urgently to resolve the issues raised by this case.

“We will deny the benefits of refugee status to those who commit serious crimes and are a danger to the community.

“Those with no right to remain in the UK will be removed as soon as possible.”

He added: “All asylum seekers undergo security checks to identify those who may have been involved in criminality.”