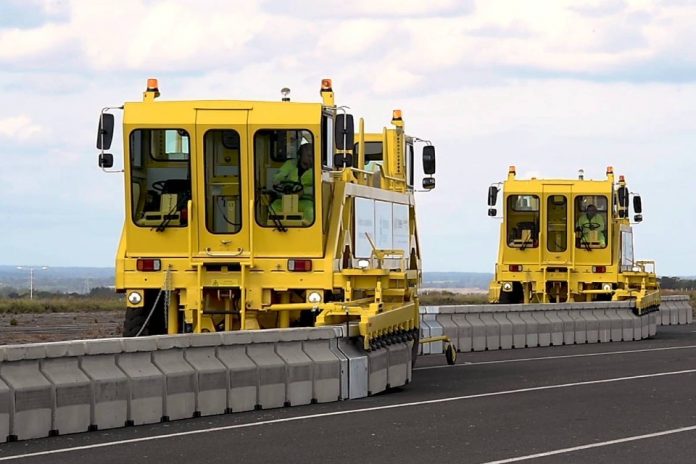 The company said any HGVs which arrive in Kent tonight will be diverted to Manston Airport to park.

Operation Brock is being set up tonight on the M20 motorway in Kent as part of a plan to keep traffic moving on the M20 during periods of cross-Channel disruption. It involves using a contraflow road layout on the M20 London-bound carriageway between junctions 9 and 8 (from Ashford to Maidstone) and directing lorries heading for mainland Europe onto the coastbound carriageway, where they can be queued if necessary.

A long concrete moveable barrier is put in place to allow the contraflow to happen safely.

Operation Brock will replace Operation Stack, which was activated overnight on Sunday as an initial response after the French government’s announcement that it would not accept any passengers or hauliers arriving from the UK for a period, and the subsequent closures of the Port of Dover and Channel Tunnel.

Operation Brock opens up more of the road network in Kent because it means traffic can continue to move in both directions on the M20, whereas Stack effectively closes it to coastbound traffic.

Hauliers are advised to avoid travelling to Kent as disruption could last for several days.

The moveable barrier will be installed on the M20 tonight and will create a new layout with a contraflow system reopening the M20 in both directions. Once deployed, this will allow traffic to continue travelling in both directions on the motorway at the same time as port bound HGVs are queued, if necessary, on the coastbound carriageway until they can travel through to the Port of Dover or Eurotunnel.

The barrier was recently successfully tested and is part of a series of measures – known as Operation Brock – aimed at keeping the M20 open in both directions during periods of cross-Channel disruption.

To make sure the barrier is deployed and removed safely, the M20 will be closed coastbound between junction 7 (for Maidstone) and junction 9 (Ashford), and London-bound between junctions 9 and 8 (Maidstone East), overnight tonight (8pm to 8am). The M20 will reopen by 8am Tuesday morning with the new road layout in place. Whenever the M20 is closed, signed diversions will be in place.

What will the M20 look like from Tuesday morning?