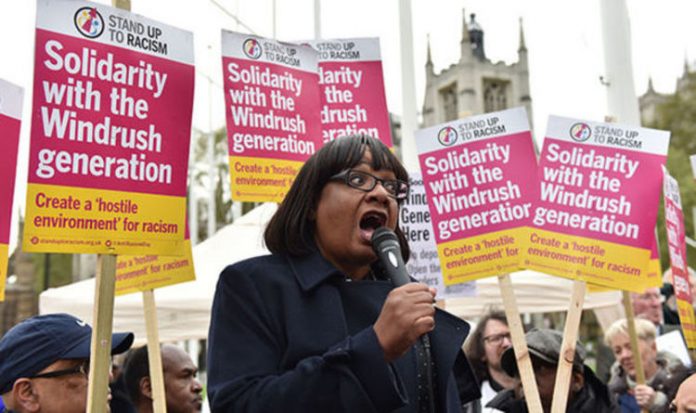 Making reference to the recent Windrush scandal this summer – in which people from Caribbean countries were wrongly detained, threatened with deportation, and wrongly deported from the UK by the Home Office despite holding British citizenship – the shadow Home Secretary criticised ministers for failing to treat “migrants as people”.

She linked the current treatment of immigrants in the UK to the harrowing experience of those living in Uganda during Amin’s reign, which saw hundreds of thousands of foreigners in the country executed and expelled Indians from the African nation.

Speaking at a conference in London outlining Labour’s immigration plans for the future, Ms Abbott said: “The most important factor is that official policy, ministerial rhetoric and media coverage fails to treat migrants as people.

“This goes all the way back to the debate about East African Asians under Idi Amin.

“What we have always seen is the other-isation of migrants and we’ve seen it, I’m sorry to say, under Labour and Conservative governments.”

Hitting back at the comparison, Tory MP David Morris said: “This comparison is outrageous and frankly offensive to all the victims of that brutal regime.”

Ms Abbott also suggested EU citizens would compete on a level playing field with migrants from other countries if the UK was under a Labour government, post-Brexit.

She revealed a plan to reform the UK immigration system that would treat people “equally and fairly” during a speech in London, claiming that non-EU citizens, including those from the Commonwealth bloc, were treated as second class migrants under the system currently in place.

She said: “Once trade deals have been struck and established there will be no unequal treatment based on which countries people are coming from.

“The same is true of how we will allocate work visas and the rights that will be attached to them.”

Ms Abbott also said during the speech that her party would make it easier for migrants to bring their families with them, putting paid to the current system of a separate application process that results in many family members being denied entry.

The party has been promised a discussion on immigration will be high on the agenda, according to The Times.

It comes as Mrs May holds on to power amid claims Brexit rebels are planning to oust the leader in a party coup if she refuses to change her Chequers plans.