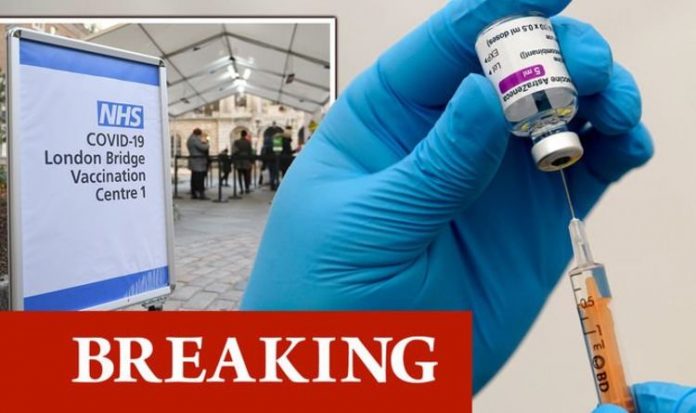 The AstraZeneca vaccine requires two doses for the highest efficacy against coronavirus infection, but new research has shown the first dose provides 76 percent protection. A new study shows the jab has 76 percent efficacy after a single dose, with efficacy improving further after a second shot was given. Oxford University also found the jab also has “substantial effect” on reducing transmission of coronavirus.

Oxford University said the findings of the pre-print paper, which had not been peer-reviewed, supported Britain’s decision to extend the interval between initial and booster doses of the shot to 12 weeks.

The UK has decided to give as many people as possible some protection from the deadly virus by lengthening the amount of time given between the first and second shot of the vaccines.

AstraZenca, the Anglo-Swedish pharmaceutical firm, has welcomed the findings and said flexibility to extend the time between doses is the best strategy for the vaccine.

Oxford academics said: “Vaccine efficacy after a single standard dose of vaccine from day 22 to day 90 post vaccination was 76 percent, and modelled analysis indicated that protection did not wane during this initial 3 month period.”

The results were gathered from trials in Britain, Brazil and South Africa, and showed some protection was given after one dose and that immune responses were boosted after the second shot, among participants aged 18-55 years old.

The university also found the vaccine can stop transmission of COVID-19.

They added: “Analyses of PCR positive swabs in UK population suggests vaccine may have substantial effect on transmission of the virus with 67 percent reduction in positive swabs among those vaccinated.”

The report states the vaccine “may have a substantial impact on transmission by reducing the number of infected individuals in the population”.

In December the Government announced the second dose would be given towards the end of 12 weeks rather than in the previously recommended 3-4 weeks.

They said they want to give a single dose of the jab to as many members of priority groups as possible.

The UK’s Joint Committee on Vaccination and Immunisation (JCVI) said: “Given data indicating high efficacy from the first dose of both Pfizer-BioNTech and AstraZeneca vaccines, the committee advises that delivery of the first dose to as many eligible individuals as possible should be initially prioritised over delivery of a second vaccine dose.

“This should maximise the short-term impact of the programme. The second dose of the Pfizer-BioNTech vaccine may be given between three to 12 weeks following the first dose.

“The second dose of the AstraZeneca vaccine may be given between four to 12 weeks following the first dose.”

The four UK chief medical officers agreed to follow the JCVI advice, as they believe the benefit of vaccinating more people outweighs the risk of individuals not having as strong protection against infection as they might have with two doses.