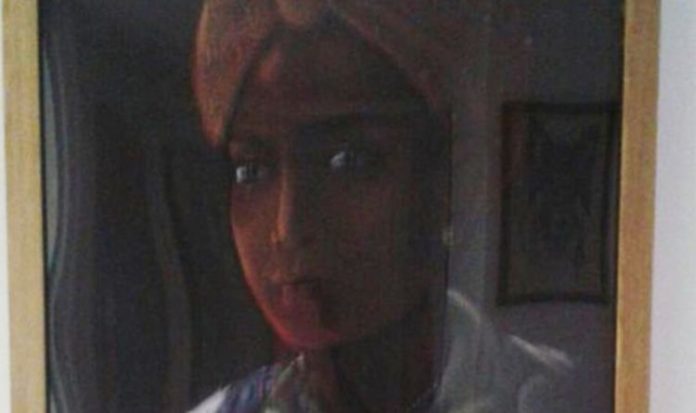 Mel Hamilton, 55, found a portrait of a woman dumped next to a commercial bin in a Brighton street. To save the abandoned painting from ending up in the rubbish she took it home – a decision she later regretted.

She told The Argus within days of reframing and hanging the image paranormal activity started and things took a turn for the worse.

Mel believes a dark entity attached itself to her and was intent on ruining her life.

The picture was painted in 1973 and shows a woman dressed in a white robe and wearing jewellery.

Mel says from the moment she took the painting into her home a series of unexplainable events happened.

Her healthy German shepherd dog suddenly died, the TV would change channels by itself and doors would open and slam shut.

She said: “I would hear the door handles move and they keys go in and out. The TV changed the channel.

“This overwhelming darkness was awful and I was alone.

“It very quickly began apparent that something was amiss. Everything was going wrong, everything.”

READ MORE Most haunted places in the world mapped: Where to visit

Mel said: “Things got really, really unbearable. There was so much activity that I didn’t want to live there.

“The energy in it was just so bad and so dark. I was a nervous wreck and covered in crosses. I went to a meeting and tried to sound rational but nobody believed me.”

After three years Mel’s son threw the portrait away and almost immediately the paranormal activity stopped.

She said: “I have peace, three years of sobriety, and a loving family. My home I am no longer scared of, and I have a very supportive new man.

“I wonder if anyone knows why she [the picture] was dumped. Part of me feels it was with a good reason, having experienced much terror.”