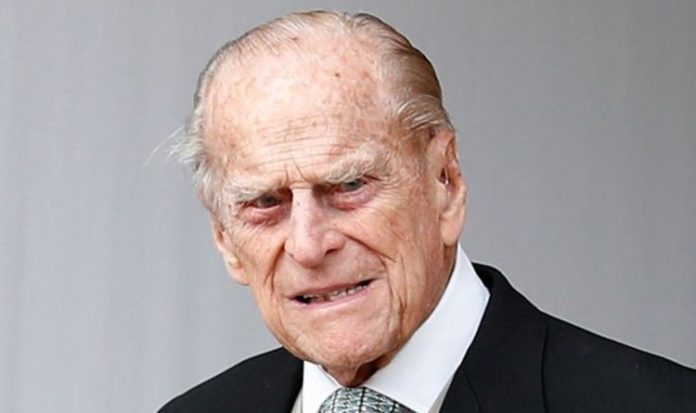 Philip served with the Royal Navy throughout the conflict and was mentioned in dispatches for bravery during the 1941 Battle of Crete. After supporting the 1943 allied invasion of Sicily he joined the British Pacific Fleet and in 1945 was in Tokyo Bay when Japan formally surrendered.

The Duke of Edinburgh is currently in London’s King Edward VII Hospital having been taken in on Tuesday evening as a “precautionary measure”.

His ill health is not related to the ongoing coronavirus pandemic and the Prince is said to be in “good spirits” as he recuperates.

The trolling attack on Prince Philip’s wartime record began on Wednesday when Victoria Arbiter, a leading royal expert, tweeted he had been admitted to hospital.

In response, one royal fan commented: “I hope he does well soon – he is such a part of all our lives.”

However, another Twitter user disagreed asking: “How is he a part of all our lives?”

She went on to incorrectly add: “He was a Nazi sympathiser during the war!”

Ms Arbiter swiftly rebuked this claim, drawing on his brave service with the Royal Navy.

She replied: “That is categorically untrue.

On Twitter, the troll responded to Ms Arbiter’s defence of the Prince by posting: “His sisters were married to prominent Nazis.”

She replied: “Three of his four sisters were married to prominent German nobleman with ties NOT Philip who served on behalf of the British.

“His sisters were not invited to his wedding.

“His mother sheltered a Jewish family in Athens and saved their lives. Again, get your facts straight.”

Prince Philip, who was born in June 1921, is the son of Prince Andrew of Greece.

As his mother was Princess Alice of Battenberg he was given the title “Prince of Greece and Denmark”.

His exploits during the Battle of Crete are described in more depth on the official Royal Family website.

It explains: “Aged 17 Prince Philip joined the battleship HMS Valiant, which fought in the Battle of Cape Matapan.

“The Prince was in charge of the ship’s searchlight control, enabling Valiant to pinpoint enemy vessels in the dark.

“For this work, he was mentioned in dispatches.”

Being mentioned in dispatches meant a serviceman was included in the official report of an incident written by a superior officer, who makes reference to their gallant behaviour.