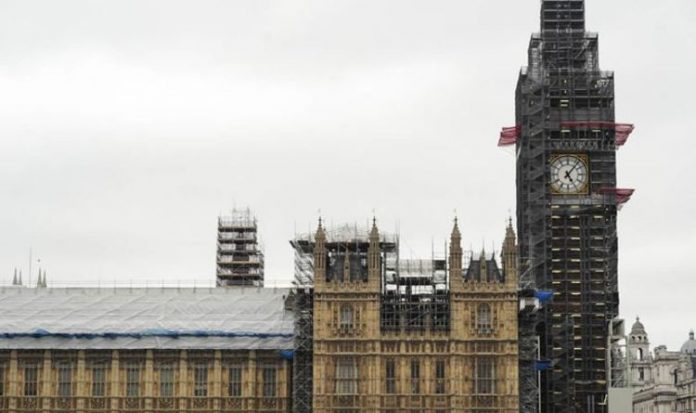 And against the economic turmoil of coronavirus, this is likely to be the more tempting option. Sources close to Jacob Rees-Mogg, the Leader of the House, have noted that the proposal to turn Richmond House on the Palace of Westminster estate into a temporary chamber have already been shelved. The move had been controversial because it would have meant the demolition of a listed building.

The source also noted that “fire safety and electrical wiring measures can be extended in a way not previously believed, which means a big project may not be necessary after all”.

There was widespread concern in Parliament that MPs could be seen spending billions of pounds on themselves at a time when the country is having to pay for the repercussions of a pandemic.

The initial estimate of £4billion was expected to grow and MPs and peers could have been removed from Parliament for six years or more.

There were also plans to move it temporarily into the Queen Elizabeth II Centre across the road.

Mr Rees-Mogg launched a review of the project in May after MPs voted to give it the go-ahead last year.

The work was deemed necessary because of concerns over fire risks, particularly with wiring.

Calls for Parliament to be refurbished had been ongoing for 20 years before getting the green light in 2018.

She warned: “Parliament is literally falling apart around the thousands of people who work there and the million or so who, in better times, visit every year.

“It poses a very real risk to health and safety in its current state.”

A 2016 report warned that work needed to be undertaken “speedily” or there was the risk of “a sudden, catastrophic failure or that small, incremental failures might make the building uninhabitable”.

It said that maintaining the Victorian building was like “trying to fill a bathtub with a thimble while the water is draining out of the plughole at the other end”.

Built in 1870, the palace is a Grade I-listed landmark.

But it is plagued by rodents, leaks and even falling masonry.

It is also considered to be a serious fire risk – it caught alight 40 times between 2008 and 2012 and has a permanent fire safety team to patrol the building.

Earlier this year, Prime Minister Boris Johnson suggested the House of Lords could be moved to York.

This idea was later rejected. And nearly half a million pounds was spent making sure new Commons Speaker Sir Lindsay Hoyle’s flat in Parliament was fit for purpose.

The vast majority of the money spent on the Speaker’s apartments were for the wider Fire Safety Improvement Programme, including £300,000 on assessing and removing asbestos.