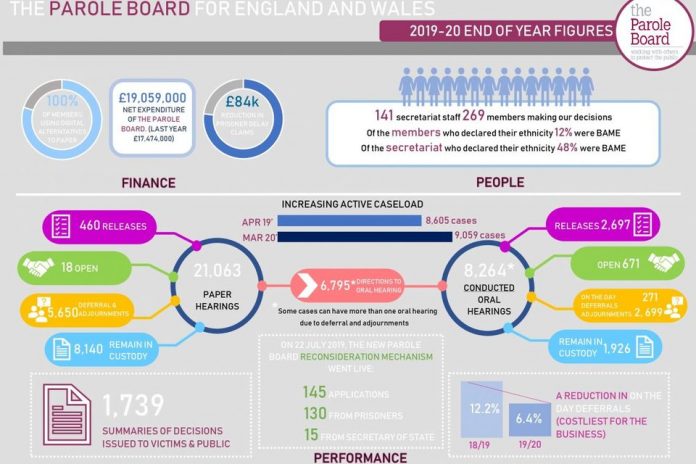 The Government launched a Root and Branch Review on 20th October, which should be the last stage in a series of reviews of the Parole Board and the surrounding system that have taken place since 2018.

This review provides an opportunity to ensure we have a fair and transparent parole system that continues to protect the public and build public confidence, improve the operation of the system and point to areas that need further improvement.

The Root and Branch Review will explore a number of crucial areas:

Prior to 2018 there was a blanket Rule that prevented the disclosure of information about parole proceedings to victims or the public. In 2018 the rules were changed allowing the Board to introduce a new service providing summaries of decisions to victims and the public. Nearly 4,000 summaries have now been issued and I now see it as a key service to victims. We now see material from our summaries routinely published in media reports.

In 2019 the Board introduced the reconsideration system which provides a legal mechanism for a prisoner, or the Secretary of State, to review a Parole Board decision if they believe the decision was irrational or involved procedural unfairness. Crucially such decisions can be made much more quickly and at less cost to the public purse than a full Judicial Review. These decisions are routinely published online at bailii.org. This important safeguard in the system also allows the Secretary of State to apply on behalf of a victim or their family. The reconsideration process provides a key avenue for our decisions to be scrutinised.

I view greater openness and transparency as an opportunity we need to embrace and have seen no detriment from our provision of summaries and publication of reconsideration decisions. Provided there are appropriate safeguards so as not to disrupt the proceedings I would welcome a staged approach to opening up hearings where it is in the public interest to do so. In other jurisdictions journalists can watch high profile parole hearings. Subject to consideration of reporting restrictions and safeguards, I can see a path to allowing that.

Could we hold a parole hearing in a court building with a public gallery? I am certain that such a move, if thought through, would do a tremendous amount to increase confidence that the Parole Board is making fair and robust judicial decisions for the protection of the public.

A huge amount of work has been undertaken in recent years to improve understanding of parole.

It is worth repeating some key facts about parole and the Parole Board: