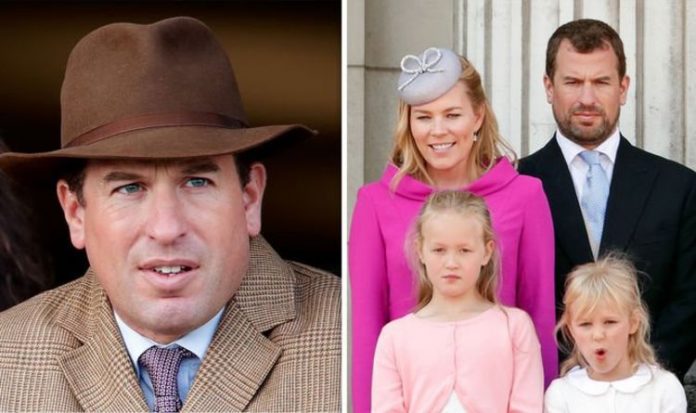 Princess Anne’s son and the Queen’s eldest grandchild featured in the 2020 ITV documentary ‘Anne: The Princess Royal at 70’. He and his sister Zara Tindall were discussing Trooping the Colour, which is the huge parade to mark the Queen’s official birthday each year. It’s a key event in the royal calendar and one of the first that young royals attend.

Both he and Zara would appear on the balcony at Buckingham Palace as very young children.

In the documentary, he revealed the warning they would be given before the doors were opened and everyone stepped out onto the balcony.

He said they would get “a clip round the ear” and were warned: “Right, behave yourself, we’re going out on the balcony.

Peter Phillips with his family at Trooping the Colour (Image: GETTY)

Peter Phillips at Trooping the Colour as a young boy on the bottom left (Image: GETTY)

These two specific instructions were likely given because, in the past, royal children have become the unintentional star of certain photographs because they have pulled a funny expression or done something else that draws attention.

For example, when Sarah Ferguson married Prince Andrew in 1986, a five-year-old Zara Phillips (now Tindall) was pictured picking her nose on the Buckingham Palace balcony in front of the newlyweds.

In 2011, at Kate Middleton and Prince William’s wedding, one of the bridesmaids gained some fans for looking very grumpy and like she did not want to be there at all.

However, Zara said days like Trooping the Colour were not all serious, and for her usually revolved around spending time with her cousins.

Peter Phillips and his family on the balcony with Meghan and Harry (Image: GETTY)

She said: “For me, family occasions were all about hanging out with our cousins and just having as much fun as possible.”

Six of the Queen’s grandchildren are around the same age and so when they came together could have a lot of fun.

Royal commentator Wesley Kerr said: “Trooping the Colour is the most astonishing mixture of pageantry, military, ceremonial, horsemanship and horsewomanship but at the heart of it is this family and the family, of course, are on performance.

“Anne, of course, does very well because she probably rides more than the others.

“Trooping the Colour is absolutely crucial in terms of what they do as members of that family.”

For Princess Anne, Trooping the Colour was one of her earliest memories ‒ she would join Prince Charles in a carriage to watch the Queen in the grandest military ceremony of the year.

For young royals, it is important training in the ceremonial role of the monarchy.

The Princess Royal said in the documentary: “The earliest one, of course, was Trooping the Colour, the birthday parade.

Neither Peter or Zara have titles, because their father Mark Phillips is a commoner and Anne decided not to request any for them.

They have lives and careers of their own outside the Royal Family, but they still participate in some of the biggest events of the year, such as Trooping the Colour and Royal Ascot.

At each of these events, the extended family comes together in a joyous reunion.