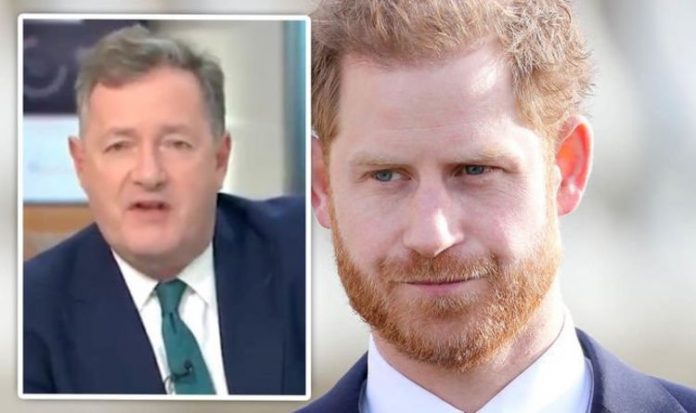 ITV’s Good Morning Britain presenter Mr Morgan accused Prince Harry of being tone-deaf after the Duke of Sussex unveiled his and Meghan Markle’s latest campaign. Mr Morgan claimed Harry does not lead by example as he has stoked division within his own family while calling for the creation of a more united, tolerant and compassionate digital landscape.

He wrote on Twitter: “Prince Harry declares war on division & a ‘crisis of hate’, after co-operating with a book that has deepened division within his own family & fuelled a crisis of mutual hate with his brother.

“Once again, the tone-deaf Duke leads by lack of example.”

Mr Morgan referenced Meghan and Harry’s upcoming biography, Finding Freedom, in which authors Omid Scobie and Carolyn Durand have made claims on the deteriorating relationship between the Dukes of Cambridge and Sussex as well as the infighting between households.

Following the publication of extracts in the The Times and the US-based People magazine sources said to be close to Kate, Duchess of Cambridge, and Prince William have hit out at the claims.

Just recently Kate, who was accused in the book of not having done enough to make Meghan feel welcome in the UK, was said to be “extremely upset” by the revelations made in the book.

However, Mr Morgan’s claim Meghan and Prince Harry have collaborated to Finding Freedom has been slapped down by both Finding Freedom’s authors and a spokesman for the Sussexes.

The royal correspondents who wrote the book said they spoke to dozens of sources including friends close to the couple, palace aides and insiders – but did not speak directly to Meghan and Harry.

Similarly, a spokesman for the Sussexes said: “The Duke and Duchess of Sussex were not interviewed and did not contribute to Finding Freedom.

Prince Harry said what he and Meghan are focusing their efforts on at the moment in a comment piece he wrote for website Fast Company.

The Duke of Sussex revealed over the past few weeks he has contacted business leaders and urged them to demand changes on social media platform before investing in the digital world.

He wrote: “Our message was clear: The digital landscape is unwell and companies like yours have the chance to reconsider your role in funding and supporting online platforms that have contributed to, stoked, and created the conditions for a crisis of hate, a crisis of health, and a crisis of truth.”

Explaining he has learned more about the issues with the current state of social media thanks to meetings with both experts at Stanford University and young people who have grown up in a fully-digital world, Harry continued: “We all need a better online experience.

“We’ve spoken with leaders across the racial justice movement, experts in humane tech, and advocates of mental health.

“And the collective opinion is abundantly clear: We do not have the luxury of time.”

While he argued calling out hate and racism on online platforms is vital, Prince Harry also urged firms who paid for advertisements on social media to use it as leverage.

He said: “For companies that purchase online ads, it is one thing to unequivocally disavow hate and racism, white nationalism and anti-Semitism, dangerous misinformation, and a well-established online culture that promotes violence and bigotry.

“It is another thing for them to use their leverage, including through their advertising dollars, to demand change from the very places that give a safe haven and vehicle of propagation to hate and division.”