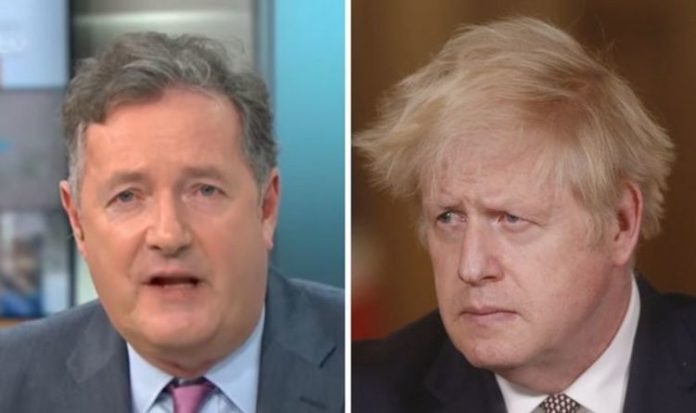 In an interview on Good Morning Britain this morning, Piers interviewed the First Minister on her pursuit of Scottish independence. Following the interview, some on social media commented on the “respect” between the ITV host and Ms Sturgeon. In response, Piers said on Twitter: “I respect the fact she always comes on & presents her case.

Piers has been a constant critic of the Government and even criticised the Prime Minister when his internet connection dropped out during a Commons debate.

During a segment last week, Piers hit out at Mr Johnson and insisted he had “gone missing”.

He said: “I don’t want to be constantly bashing, but he constantly does stuff that deserves to be bashed.

“He is the Prime Minister in isolation. What’s the one thing you’d do?

“I’d say I don’t care what it is, you make sure when I appear in Parliament, make sure my connection works and if it doesn’t I’ll have you lowered into a pit of tarantulas.

“Instead he was cut off for half an hour.

The former ITV news journalist took the role on October 8 and is part of a series of changes in Downing Street.

As reported by the Financial Times, Mr Johnson is also set to promote more northern and younger MPs in his reshuffled next year.

In a bid to show any Tory MPs the risk of rebelling against the Government, Mr Johnson will allegedly look to MPs from the 2015 and 2017 intake who have shown loyalty and ability in their positions.

Of the 2019 intake, Claire Coutinho and Laura Trott could be set for a promotion.

An insider said: “The whipping operation has found a hard stick.

“It’ll be made very clear that voting against the government means two years in the wilderness.