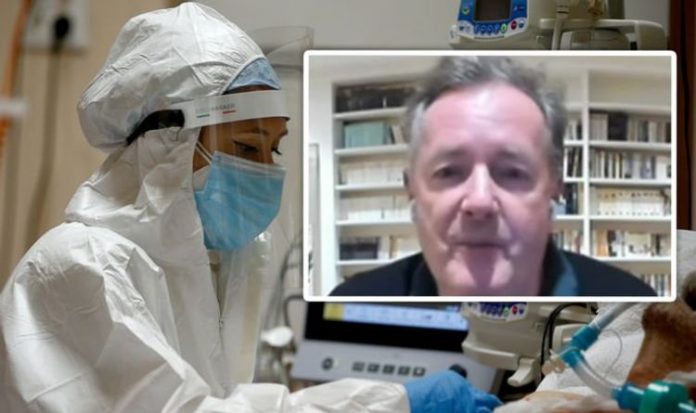 The Good Morning Britain (GMB) host took to Twitter to criticise Boris Johnson’s Government for a “failure to prepare” for the coronavirus pandemic. Mr Morgan responded to the NAO report which found the NHS paid inflated prices for PPE due to not procuring enough of the equipment to cope with the strain of the pandemic. It comes as Chancellor Rishi Sunak today unveiled the Government’s latest spending plans.

The GMB host has regularly criticised the Government for what he calls a “failure” to cope with coronavirus.

After the release of the NAO report, he said on Twitter: “Wow. The full shameful cost of our failure to prepare for this pandemic is now coming out.”

NAO’s report stated the Department for Health and Social Care paid 1,300 percent more for PPE than they would have in 2019 in spring.

The office’s report noted that PPE providers made a “huge effort” to boost the UK’s supplies after they found existing stockpiles were insufficient.

Gareth Davies, head of the NAO, said the Government has taken “urgent action” to remedy the UK’s PPE stockpile, but faced a huge increase in cost.

He added: “Once it recognised the gravity of the situation… the price of PPE increased dramatically, and that alone has cost the taxpayer around £10 billion.”

The NAO report comes a week after the Government spending watchdog found there had been a “high priority lane” established for PPE providers touted by officials and senior NHS staff.

One in 10 of the companies in the “lane” received a contract to provide PPE, compared to one in 100 from the “ordinary lane”.

Mr Morgan, despite voting for Mr Johnson’s Tories in 2019, has been highly critical of the Government’s handling of the pandemic.

Yesterday Mr Morgan mocked the Prime Minister over his speech on coronavirus restrictions over Christmas.

When Mr Johnson’s connection cut out mid-broadcast to the House of Commons, Mr Morgan said: “I don’t want to be constantly bashing, but he constantly does stuff that deserves to be bashed.

“He is the Prime Minister in isolation. What’s the one thing you’d do? I’d say I don’t care what it is, you make sure when I appear in Parliament, make sure my connection works and if it doesn’t I’ll have you lowered into a pit of tarantulas.

Mr Morgan has also lambasted Health Secretary Matt Hancock on GMB, with the minister appearing on the show after a 201-day absence.

When the Health Secretary first appeared on GMB again earlier this month, Mr Morgan skewered him over the UK’s testing policy which he said was “still a complete shambles”.

He added: “You are the Health Secretary, it’s on your watch. It turned out we had very little protective personal equipment for our health workers, so hundreds of them died.

“It then turned out that in care homes, far from having the ring of protection which you’d been boasting about, we actually sent thousands of elderly people out of hospitals and into care homes without testing them.”