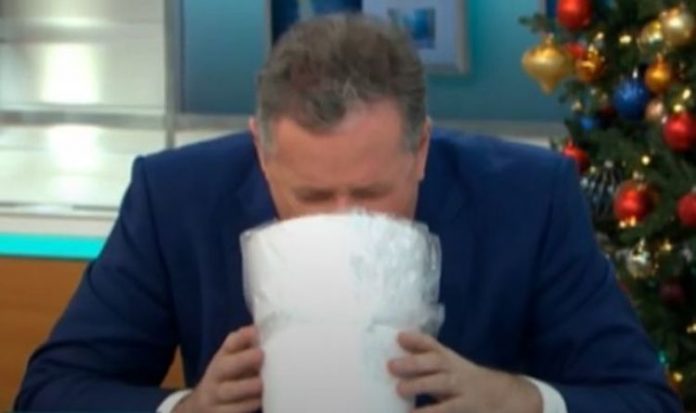 Piers Morgan has slammed Meghan Markle and Prince Harry’s new podcast as “vomit-making”. The Duke and Duchess of Sussex announced on Tuesday that they have signed a multi-year deal with streaming platform Spotify to produce audio shows. However, the trailer for their ‘Holiday Special’ was compared to a “parody” by Good Morning Britain panellists.

After playing a clip, the camera cut to Mr Morgan, who had his head in a bucket.

The TV host pretended to throw up with vomiting noises playing overhead.

Commentator Kevin Maguire burst out laughing at the display as Mr Morgan apologised.

Mr Morgan said: “How utterly vomit-making. I can’t wait for the Susanna Reid defence of this one.”

But even Ms Reid, who has been known to hit back as Mr Morgan during his repeated rants about the Duke and Duchess of Sussex, admitted she had been unimpressed with their latest project.

She shot back: “Can I just tell you something?

“Page three of the Mail has a transcription of the podcast.

“I actually thought it was a parody.”

Their first episode, a Holiday Special, is due to be released later this month.

In the trailer, the Duchess tells listeners: “One of the things my husband and I have always talked about is our passion for meeting people and hearing their stories.

“No matter what the story, they usually offer you an understanding of where someone else is coming from, and, at the same time, remind you in some way of a story about yourself.”

The Duke adds: “That’s what this project is all about – to bring forward different perspectives and voices that perhaps you haven’t heard before, and find our common ground. When that happens, change really is possible.”