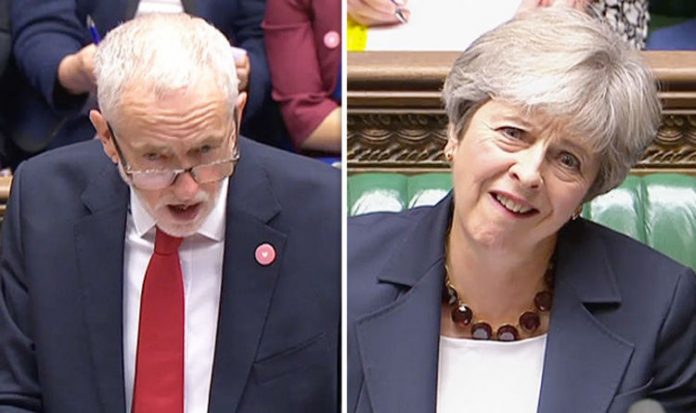 Jeremy Corbyn told the Prime Minister Leave voters expected the Brexit negotiations to be handled by a competent Government arguing she had failed to represent British voters appropriately.

The Labour leader took a swipe at Mrs May as she claimed to be able to reach a deal with the Brussels bloc that would present the UK with “countervailing opportunities”.

Mr Corbyn joked about the Prime Minister’s recent trip to Africa as he compared her dancing skills to her negotiations tactics.

He said: “A majority of people might have voted to leave but they expected the negotiations to be handled competently and they certainly are not.

“I didn’t hear a single one of these countervailing opportunities.

“I say to the Prime Minister, quite simply this: she can’t keep dancing around all the issues.”

Mrs May struggled to keep a straight face as the Commons erupted in laughter at the Labour leader’s joke.

Mr Corbyn went on: “It seems that Panasonic has taken the cue and decided to dance off altogether – they’re relocating out of this country.

“Could the Prime Minister tell the House how many other companies have been in touch with her or her ministerial team and told her privately that they intend to relocate in the absence of a serious, sensible deal with the European Union?”

Mrs May said businesses have “shown confidence” in the economy before reeling off a list of investment projects, adding: “What we’re doing is negotiating a Brexit deal that will deliver for this country, deliver on the vote of the British people, and that will ensure we do so protecting jobs, maintaining our union and ensuring no hard border between Northern Ireland and Ireland.”

She added Mr Corbyn had given mixed messages over trade deals and free movement, claiming: “He can’t even agree with himself on his own position.”

The Prime Minister’s Chequers deal has been criticised by both prominent Brexiteers and arch-Remainers in the House.

The deal, that has already been rejected by EU Chief Negotiator Michel Barnier, might be completely scrapped next week when Mrs May will meet her Cabinet to discuss future moves.

He claimed Mrs May’s proposals had no chance to be revived as it lacks supporters from both sides of the argument.

“So it doesn’t have many supporters.”

The Prime Minister said the white paper provided a “comprehensive and ambitious vision” for the future security relationship.

She said: “That’s why we’re proposing that security partnership, to protect our shared law enforcement and criminal justice capabilities, facilitate continued cooperation and support our joint working on security issues such as counter-terrorism.”