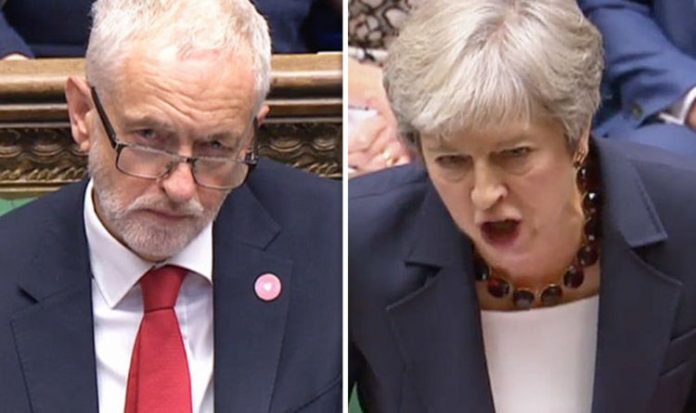 Theresa May began Prime Minister’s Questions on Wednesday by demanding Jeremy Corbyn to apologise the anti-Semitism crisis that has engulfed the Labour Party.

“There is no place for racial hatred in our society and it is important that we take every step to tackle it.”

She added: “I believe that we should all be united in our determination to tackle anti-Semitism.

“So when the leader of the Labour Party stands up, he should apologise for saying that Jewish people who have lived in this country their whole lives, do not understand English irony.”

One member of Parliament shouted “shocking” as Mrs May took her seat to allow the Labour leader to go up to the dispatch box.

But when Mr Corbyn rose to speak he was greeted with a barrage of cries from Tory MPs to resign.

Labour MP Tom Watson was on the frontbench shaking his head at the Tory MPs.

Mr Corbyn said: “Mr Speaker, there is no place for racism in any form in our society – on that we are all agreed.

“And we should tackle it wherever it arises in our own parties as well. That includes the Conservative Party.”

Mrs May later said the Labour leader “should be ashamed of himself”.

The Prime Minister said: “He is trying to change his party so that anti-Semites can call the creation of Israel racist and he should be ashamed of himself.”

On Tuesday, the National Executive Committee (NEC) made the decision to adopt the International Holocaust Remembrance Alliance (IHRA) definition of anti-Semitism along with all its examples.

However, the NEC has faced backlash for also passing a statement of clarification that the changes do “not in any way undermine freedom of expression” on Israel or the rights of Palestinians.

Campaigners said the party seems “determined to provide a safe space for anti-Semites” and adding such a caveat to the internationally accepted definition just gives racists a free pass.

Labour Friends of Israel have declared that Mr Corbyn is “part of the problem, not the solution”.

“The ‘free speech caveat’ drives a coach and horses through the IHRA definition. It will do nothing to stop anti-Semitism in the party.”

A Labour Party spokesman said: “The NEC has today adopted all of the IHRA examples of anti-Semitism, in addition to the IHRA definition which Labour adopted in 2016, alongside a statement which ensures this will not in any way undermine freedom of expression on Israel or the rights of Palestinians.

“The NEC welcomed Jeremy Corbyn’s statement to the meeting about action against anti-Semitism, solidarity with the Jewish community and protection of Palestinian rights, as an important contribution to the consultation on Labour’s Code of Conduct.”

In July, Mr Corbyn and his supporters had resisted agreeing to the full definition because of clauses, which do not allow for people to question the right of the state of Israel to exist and blame Israel entirely for the Palestinian problems.

Express.co.uk have contacted MPs to clarify comments made during the exchange during Prime Minister’s Questions on Wednesday.