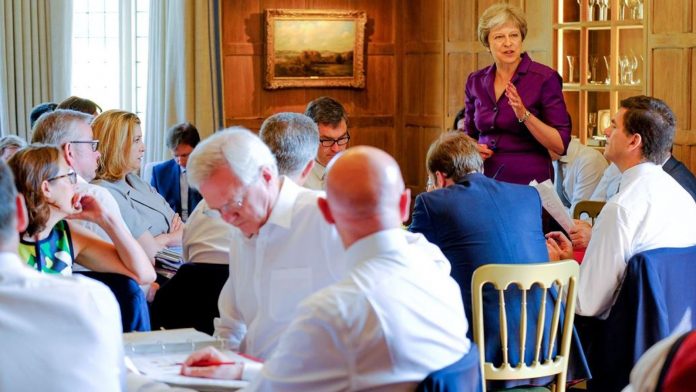 Brexiteers and Remainers have branded the cabinet’s new Brexit plan a “sell out” and a “stitch-up”, while businesses welcomed the “unified approach”.

After a day of thrashing out a trade and customs proposal to take to the EU, Theresa May’s cabinet agreed a 12-point plan which includes a new UK-EU free trade area for goods.

As the details were revealed on Friday night – 16 months after Article 50 was triggered to leave the EU – several MPs spoke of their disapproval, but businesses appeared to welcome the proposal.

“It is farcical that it has taken two years for the Cabinet to even attempt to agree a position on the basics of our future relationship with the EU.

“On previous form, whatever has apparently been agreed will struggle to survive contact with Tory MPs and members.

“This looks like a sticking plaster rather than the Government’s final position. With just a matter of months of the negotiations left, Theresa May’s ability to deliver Brexit continues to be in doubt.”

“Brexit did not mean keeping the 90% of our economy that does not export to the EU trapped by their laws.

“This is a sell-out to the global corporates, as it was during Maastricht.

“The Tory Eurosceptics are a waste of space. No resignations means that the so-called Brexiteers in Cabinet don’t have a principle between them, career politicians all.”

“After two years of wasted time, and of big egos putting themselves ahead of the country, we’re left with yet another behind-closed-doors stitch up that would leave us all worse off and which doesn’t resolve many of the fundamental problems created by Brexit.

“No-one should be in any doubt: the proposal on offer from the Government would represent a bad deal for our country, will create huge added bureaucracy and costs for business, and is highly unlikely to be accepted by the EU.

“How ever anyone voted in the 2016 referendum they should be furious at this Government stitch-up.

“This only confirms how important it is that we have a People’s Vote on whatever botched Brexit deal the government comes up with, so the people of this country can decide whether or not it’s good enough.”

Tory MP Andrea Jenkyns, who quit as a minister to speak out over Brexit

“Common Rule Book: so British businesses will continue to be a rule taker from the EU. I hope the details are better than the breaking headlines. Pray God.”

Ms Jenkyns added that she would be willing to help trigger a leadership contest if the deal left the UK “one foot in, one foot out” of the EU.

“I am not a hypocrite,” she told the BBC.

“I am standing up for the 17.4 million people who wanted these red lines and who wanted to ensure we did not have a half in-half out Brexit.”

“Business will welcome the fact the Government has reached agreement

“That is good news – particularly the free trade area for goods, which the CBI and its members have long called for.

“The hard work starts now and time is a challenge. It has taken two years for the UK to agree its position; we now have two months to agree it with Europe. But it’s a good starting point.”

“The #Brexiteers are smart enough to see that if they sign up to a proposal that David Davis has said is impractical and which the EU won’t accept, they can blame the Eu when negotiations break down.

“This way they get their hard Brexit served on a plate.”

“PM once again wins the prize for cooking up Brexit fudge and euphemisms.

“I think her cunning plan is to make everything so complex that nobody has a clue any more what she’s on about.

“EEA remains the only viable option, as she will learn to her cost.”