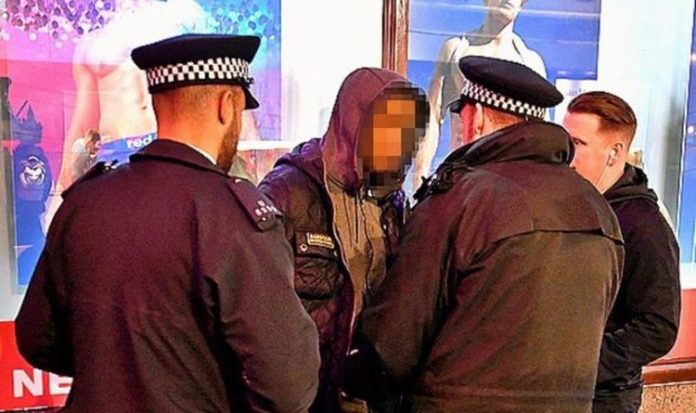 The three that did not were Dorset, Warwickshire and Surrey.

The Home Office said: “Stop and search is a vital tool for taking deadly weapons off our streets and preventing lives from being lost.”

The report said: “The Metropolitan Police service accounts for half of the increase in the number of stops and searches in latest year.” Other forces to see significant rises were Merseyside (seven percent), Essex (six percent) and South Yorkshire (five percent).

Meanwhile the number of Section 60 searches, where officers can search for weapons amid fears violence is about to break out, rose by 35 percent to 18,081.

This comes after officers were given greater powers last year. The rules, which can be in force for up to 48 hours, let them search people in a defined area during a specific time period when they believe serious violence will occur.

Officers can look for weapons before they can be used, or for those used in a recent attack, and do not need “serious grounds for suspicion”– only a reasonable belief that a disturbance may occur.

The figures come as the Met Police revealed it had arrested 873 of London’s worst criminals since July 1.

Detective Chief Superintendent Lee Hill, of the Violent Crime Taskforce, said: “Some of London’s most prolific and dangerous individuals have been taken off the streets in what has been a truly Met-wide effort.

“The public will continue to see significant operational activity to deter offenders from returning to crime and to suppress violence in all its forms.”