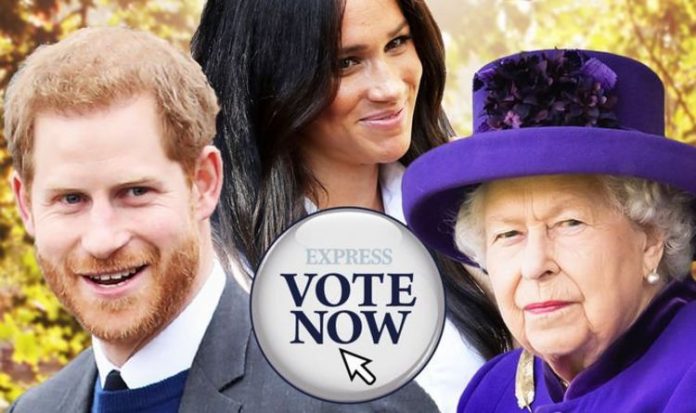 Meghan Markle and Prince Harry stood down as senior members of the Royal Family earlier this year, in favour of becoming financially independent and moving abroad. The couple agreed to a number of new rules after quitting the royal fold, such as losing their HRH titles, with a review of the terms due to take place in March 2021.

In January, Meghan and Harry announced the bombshell news they would be stepping down as senior royals.

The news, published on their social media accounts, prompted a number of crisis meetings between the Queen, Prince Charles, Prince William and Prince Harry.

During the discussions, dubbed the ‘Sandringham Summit’, the family agreed Harry and Meghan would have to abide by a number of new rules.

For example, the couple were told they could no longer use their HRH (His Royal Highness/Her Royal Highness) titles after stepping down, but they would still be known as the Duke and Duchess of Sussex.

Harry was also required to step back from all official military appointments, losing the titles of Captain General of the Royal Marins, honorary Air Force commandant of the Royal Air Force Bas Honington and honorary commodore-in-chief of the Royal Navy’s Small Ships and Diving Operation.

The couple were also told they would “no longer formally represent the Queen” and would no longer have the authority to use the term ‘royal’ for promotional material or appearances.

As a result, the pair had to ditch their brand name “Sussex Royal”.

Meghan and Harry were also told they would no longer receive public funds, owing to their desire to become financially independent.

The discussion will allow both sides to negotiate any changes to the current terms and to “ensure the arrangement works for all parties”.

A Palace source told the Telegraph at the time: “The point of the 12-month review is that the family wants the best for them and everyone recognises this is uncharted territory.

“Rather than do something finite, this is a pragmatic family conversation about what’s working and what’s perhaps not working.”

As a result, the Queen could decide to reinstate the couple’s HRH titles in a gesture of good will.

However, such a move could prompt an outcry as royal commentators and fans have frequently called for the Queen to go even further, and strip the couple of their Sussex titles as well.

GMB host Piers Morgan has been a leading advocate for this, having accused the couple of using their royal links for monetary gain and PR opportunities.

Most recently, the journalist accused the couple accused of carrying out a “publicity stunt” after sharing pictures of their private visit to a cemetery on Remembrance Sunday.