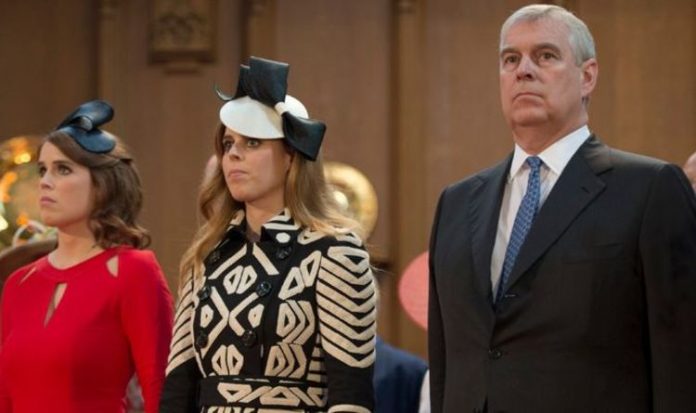 Prince Charles’ “vision for a streamlined monarchy” proved to be a “big issue” for Prince Andrew, royal commentators have claimed. The Duke of York expressed concern that the model would negatively impact his daughters, Princess Beatrice and Princess Eugenie. Channel 5 documentary, ‘Beatrice and Eugenie: Pampered Princesses’, explored these “tensions”.

Narrator Glynis Barber told viewers: “As titled princesses, it was expected that Beatrice and Eugenie would become full-time working royals.”

Vanity Fair Royal Editor Katie Nicholl explained: “Charles made his vision for a streamlined monarchy really very clear around the time of the Diamond Jubilee celebrations.

“When he did, that was a big issue for Andrew.

“Andrew’s view was that they had the HRH titles therefore they are blood princesses.”

She continued: “Therefore they should be full-time working member of the Royal Family.

“It didn’t pan out that way and that definitely caused tension between the royal brothers, Charles and Andrew.”

Ms Barber added: “For Beatrice and Eugenie, the dilemma of being non-working royals who have princess titles lies at the heart of many of the issues they have to grapple with.”

Royal author Tom Quinn said: “For two members of the Royal Family who are as close as Eugenie and Beatrice to being core members, it is unusual to working.”

Neither of the princesses receives an allowance from the Privy Purse, although they do undertake the occasional public engagement.

Since 2017 Beatrice has had a full-time job and splits her time between London and New York.

She is Vice President of Partnerships and Strategy at Afiniti.

The royal works with the programme through charity endeavours and speaking engagements.

Eugenie meanwhile is the Director of the Hauser & Wirth art gallery.