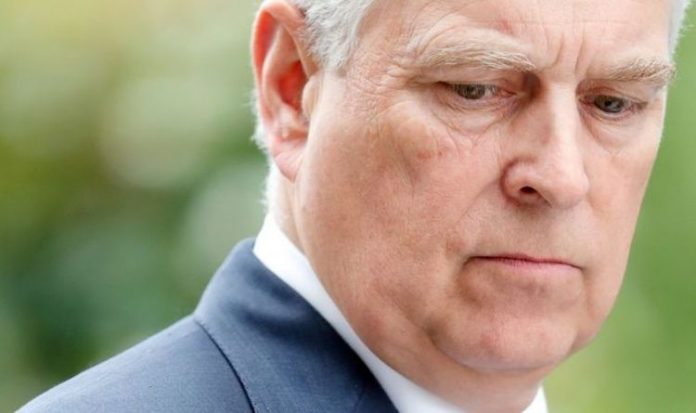 Prince Andrew’s possible return to active royal duty has been deemed impossible by royal expert Charlie Proctor. The editor of Royal Central took to Twitter to mark the 12 months passed since the Duke of York’s interview to Emily Maitlis.

During their 45-minute-long chat, deemed a car crash by several commentators at the time, Prince Andrew discussed his relationship with convicted sex offender Jeffrey Epstein and allegations made by Virginia Roberts.

“His failure to show remorse over his friendship with a convicted sex offender, and his lack of empathy for Epstein’s victims, sealed his fate.

“He will never return to public duties, despite his delusion of grandeur.”

Prince Andrew arriving at church with the Queen in January (Image: GETTY)

Express.co.uk has contacted Buckingham Palace for a comment on this remark.

Speaking to Ms Maitlis, the Duke of York said during the interview he did not recollect meeting Ms Roberts.

Asked about his association with Epstein, who was found dead in his prison cell in August last year, Prince Andrew also said he did not regret it “as a whole”, as it had allowed him to make connections.

In the aftermath of the interview, Prince Andrew saw a few of his patronages and associations he was supporting announcing they were reviewing their association with the royal.

Prince Andrew has been spotted only a handful of time in public over the past 12 months (Image: GETTY)

A few days after the interview, on November 20, Prince Andrew, who continues to wholly deny any wrongdoings, issued a statement in which he announced he would temporarily step back as working royal.

In his statement, the Duke said: “It has become clear to me over the last few days that the circumstances relating to my former association with Jeffrey Epstein has become a major disruption to my family’s work and the valuable work going on in the many organisations and charities that I am proud to support.

“Therefore, I have asked Her Majesty if I may step back from public duties for the foreseeable future, and she has given her permission.”

In his statement, the Duke also mentioned Epstein’s victims and their suffering and expressed “regret” in regards to his association with the former financier.

He said: “I continue to unequivocally regret my ill-judged association with Jeffrey Epstein.

“His suicide has left many unanswered questions, particularly for his victims, and I deeply sympathise with everyone who has been affected and wants some form of closure.

“I can only hope that, in time, they will be able to rebuild their lives.

“Of course, I am willing to help any appropriate law enforcement agency with their investigations, if required.”

Prince Andrew has been seen in public only a handful of time since last November.

Two days after stepping back as working royal, Prince Andrew was seen horse riding with his mother the Queen in Windsor.

The Duke of York was also at Sandringham on Christmas Day last year with other senior royals.

He was seen on a walk on the estate on the morning of December 25 with his elder brother Prince Charles as well as with his younger daughter Princess Eugenie.

However, the Duke of York did not attend the 11am service at St Mary Magdalene Church nor met royal fans gathered outside the chapel.

In January, the Queen was accompanied to church by the Duke.

In the height of the first lockdown, Prince Andrew was photographed preparing care parcels with his ex-wife Sarah Ferguson, which he later delivered to Thames Hospice.

In July, when his eldest daughter Princess Beatrice married Edoardo Mapelli Mozzi in Windsor, the Duke did not appear in the official pictures shared by the palace.

Ever since stepping down, the Queen’s third child hasn’t attended an official royal engagement, including last week’s Remembrance Sunday.