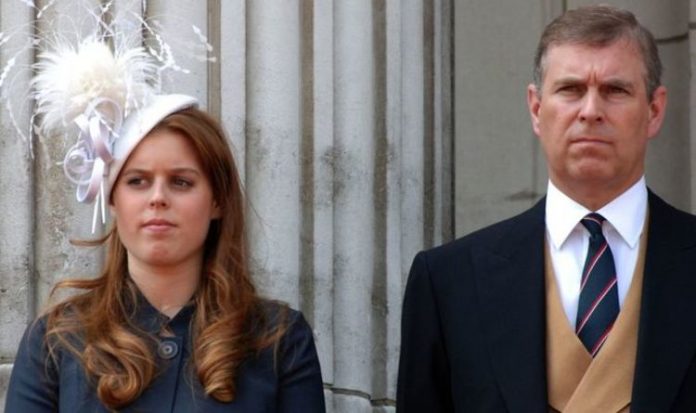 In his now-notorious interview with Newsnight in November last year, Prince Andrew said he had taken his eldest daughter to a Pizza Express in Woking on the afternoon of March 10 2001, the day Virginia Roberts Giuffre says she first met and had sex with the Duke of York. But a source has now raised questions about his alibi, claiming Princess Beatrice has “absolutely no recall whatsoever” of that specific birthday party in northwest Surrey or of her father picking her up.

Rather than dismissing Prince Andrew’s alibi, however, the source has said Princess Beatrice was a young schoolgirl at the time who went to “any number” of meals at the Woking Pizza Express.

The source added the young York cannot remember every single one of them, two decades after the event.

This unnamed source spoke with the Daily Mail as part of the newspaper’s investigation into the whereabouts of Prince Andrew on March 10, 2001 and Mrs Robert Giuffre’s allegations against the Duke.

The newspaper also spoke with the parents of the birthday girl who celebrated her big day at the Woking Pizza Express.

The family said Princess Beatrice did attend their daughter’s party.

A source has claimed Princess Beatrice has no recollection of attending a party in Woking on March 10 2001 (Image: GETTY)

Prince Andrew has stepped back from public duties (Image: GETTY)

They added the royal had taken part in several other gatherings at that same location in Woking, as it was one of the places they liked to go for a treat.

The family explained they don’t have pictures of Beatrice attending the event saying: “We had made a deliberate decision from the outset not to take photographs of, or around, Bea as it seemed to be permanently open season among some parents who indulged in this sport.”

They added: “The party was almost 20 years ago.

“We were living in Woking and had two daughters at prep school there.

“Not only were their birthdays celebrated in Pizza Express but almost every beginning of term, end of term and half-term.

“Pizza Express was just the place they liked to go for their treats.

“Bea was one of our daughter’s friends at school.

“There were no special arrangements or formalities regarding her parents, they were frequently around the school and the girls’ social lives. They were informal and unobtrusive.”

The Daily Mail also reported to have seen a document, described by the newspaper as an household diary, showing three entries related to that afternoon.

The first concerns a birthday party of Beatrice’s friend at the New Victoria Theatre in Woking.

On that day, the theatre was playing Noises Off in the early afternoon, the newspaper wrote, adding matinees at that theatre usually started at approximately 2.30pm.

A second entry reads “manicure”, and this beauty treatment appeared to have been booked for “A” – Andrew, the newspaper reported, adding it had been scheduled for the same time the play in Woking was to start.

A third and final entry in the diary reads “Pizza Express”.

In its investigation, the Daily Mail noted Prince Andrew would have been at his beauty treatment at the time Princess Beatrice was due to be dropped off to the theatre.

Virginia Roberts Giuffre is one of the victims of Jeffrey Epstein (Image: GETTY)

The newspaper wrote the Princess may have skipped the theatre and simply gone to the birthday party at the restaurant in the afternoon.

The Daily Mail also reported the Duke now has a “vague recollection” of being parked up and “waiting under a railway bridge” near the restaurant.

“I’ve never been… I’ve only been to Woking a couple of times and I remember it weirdly distinctly.

“As soon as somebody reminded me of it, I went, ‘Oh yes, I remember that.’”

During the weekend Mrs Roberts-Giuffre has said she first met Prince Andrew, the Duke reportedly had only one protection officer on duty rather than two.

The Mail said that officer has since died.

The housekeeper on duty on that weekend at Sunninghill Park, where the Duchess of York and her two daughters lived until 2006, told the Daily Mail they can’t remember whether the Duke was home on the evening of March 10.

Mr Roberts-Giuffre is one of the victims of convicted sex offenders Jeffrey Epstein.

She has accused Prince Andrew of having slept with her at Ghislaine Maxwell’s home in London on March 10, when she was 17 and being trafficked by Epstein.

The Duke of York has repeatedly denied this allegation.

A picture shows the Duke and Mrs Roberts-Giuffre inside the house of Maxwell, with the then girlfriend of Epstein smiling in the background.

However, Prince Andrew, who has wholly denied any wrongdoings, told Ms Maitlis he has no recollection of that picture ever been taken or of even meeting Mrs Roberts-Giuffre.

A spokesman for the Duke told the Daily Mail: “It would not be appropriate to comment on any of these matters.”

Express.co.uk has contacted representatives of Prince Andrew for further comment.