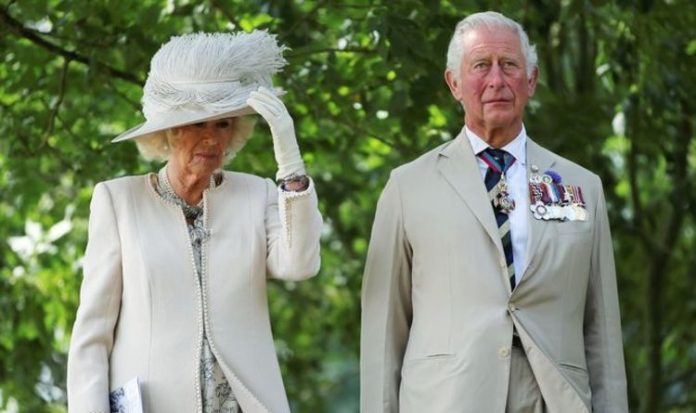 The Prince of Wales and the Duchess will honour Germany’s National Day of Mourning, with Charles giving an important address relating to “the German-British friendship”. Clarence House announced the royal couple will fly to Berlin to attend the Central Remembrance Ceremony on November 15.

In a statement Clarence House said: “Their Royal Highnesses will also attend the wreath-laying ceremony at the Neue Wache Memorial, before joining the Central Remembrance

Ceremony at the German parliament, where the Prince of Wales will deliver a speech.

“The National Day of Mourning will this year focus on the German-British friendship, which has grown in the 75 years since the end of the Second World War.

“The event pays tribute to the Allied commitment to the liberation from Nazi occupation and to the reconstruction, re-democratisation and subsequent reunification of Germany. It remembers all victims of war and tyranny.”

They will also make history as it will be the first time a member of the British Royal Family has participated in the event.

Charles and Camilla will take part in the wreath-laying ceremony at the Neue Wache Memorial and will later attend the service at the Bundestag.

In a post on Twitter, Royal correspondent for the Daily Express Richard Palmer, said: “Prince Charles and Camilla will attend the Central Remembrance Ceremony in Germany on Sunday to commemorate all victims of war and tyranny.

“They will travel to Berlin at the request of the British Government after being invited by German President Frank-Walter Steinmeier.

He was on official business at the request of and on behalf of Her Majesty’s Government, which granted him the exemption.

The UK government website states: “As of 1 August 2020 the Kuwait Government is allowing British citizens to enter Kuwait if they hold valid residencies and a negative PCR test, conducted no more than 96 hours before acceptance on the flight to Kuwait.”

During his visit to Kuwait, the Prince of Wales gave his condolences on behalf of the Queen to the new Emir of the nation, His Highness Sheikh Nawaf Al Ahmad Al Sabah.

The Queen also sent the new emir of Kuwait a letter, which was also published on the Royal Family’s Twitter account.

In the letter, she wrote: “I was saddened to hear of the death of His Highness Sheikh Sabah Al Ahmed Al Jaber Al Sabah.

“Your distinguished brother devoted his life to the service of the State of Kuwait and especially its relationship with its allies and friends.

“I have deeply valued his friendship towards the United Kingdom, and his memorable State Visit in November 2012.

“I offer Your Highness my sincere condolences. I offer also my sympathy to the people of Kuwait. May the long history of close companionship between our two families continue.”