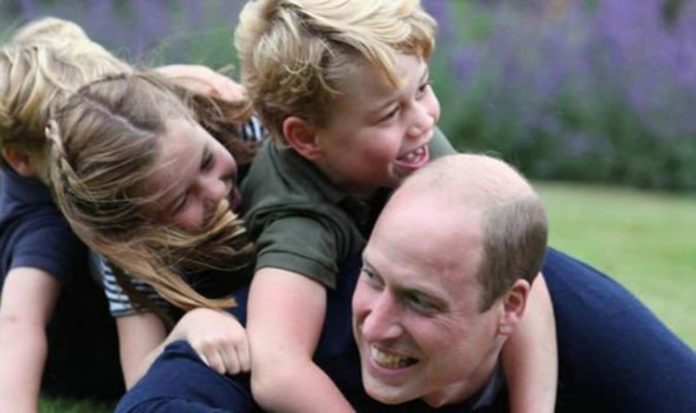 When Flt Sgt Thomson talked about her son getting to eat a lot of cake on his birthday, which was on Remembrance Sunday, William cracked a joke about children and sugar highs.

He said: “Then the sugar kicks in and it’s all chaos after that.”

The Duke then referenced his children’s birthday parties and added: “Yeah, I know.”

The Duke and Duchess of Cambridge have spoken about how their children have been energetic throughout the UK’s coronavirus lockdown from March to July.

When William visited Smiths The Bakers, a family-owned bakery, he told the owners about how George Charlotte and Louis have all been busy in the kitchen throughout lockdown.

He said: “The children have been attacking the kitchen and it’s just been an explosion of flour and chocolate everywhere.”

William later visited Belfast to mark Emergency Services Day, and admitted he was happy schools were opening back up after the coronavirus lockdown and said: “I think every parent is breathing a sigh of relief that school has started again.

“Five months – it’s been wonderful, but it’s been a long five months.”

In 2016, William also said George and Charlotte were very playful to guests at the Welsh Rugby Charitable Trust Friday.

He said: “No broken bones yet but they’re trying. Running around, pushing things, jumping.

“Please tell me it gets easier.”

In the Remembrance week call, William also joked about getting back into shape after lockdown.

Talking to the military personnel, the Duke remembered being “beasted” by a personal trainer fitness instructor while he was in the forces.

He added to Leading Physical Instructor Damon Bell: “I remember being beasted by people like you Damon on the Iron Duke.

“The on-deck PT was always quite a fun afternoon. I think after a number of lockdowns I might need your PT skills to help get back into shape again.”

Mr Bell replied: “Always on the end of a Zoom call, Sir, whenever you’re ready.”

The Duke also paid tribute to the personnel in the call, saying he was “grateful” for their service.

He added: “I hope that you know that we are still thinking about all of you and the important job you’re all doing, and that everyone is very grateful.

“I hope that over Remembrance Sunday we can remind people just how committed and determined, and how brilliant all the people we have in the Forces are around the world.

“People don’t necessarily realise how committed and scattered the British armed forces are around the world.

“It is quite impressive just a little snapshot of you three here in important areas of the globe where we are committed to doing our best and making a difference.

“It is interesting at Remembrance to have that time to reflect on all the roles that you guys are playing and British forces are committed to.”