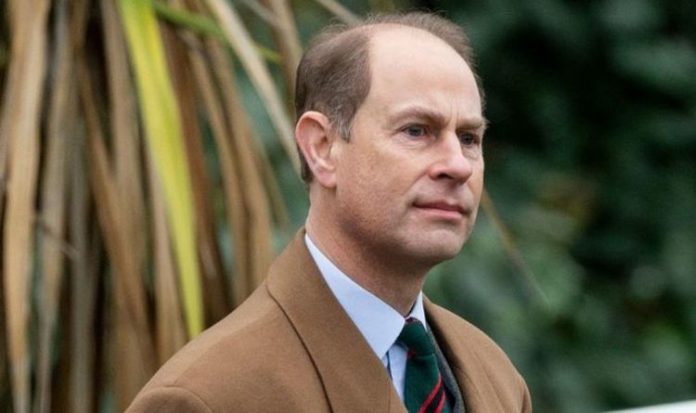 Princess Eugenie, the Queen’s granddaughter, gave birth to a son yesterday morning at the Portland Hospital in central London. The royal baby, which has not yet been named, weighed 8lbs 1oz and is the first child of Eugenie and Jack Brooksbank, who married in October 2018. The new royal brood has changed the line of succession – and has seen Prince Edward, the Queen’s son, fall further down the lineage.

The baby boy has become 11th in line to the British throne, displacing the child’s great uncle, Prince Edward, 56.

Edward, who is the Queen’s youngest child, has moved from 11th to 12th place in the line of succession.

This is because the Queen’s older children, and their offspring, take precedence.

The Queen’s eldest son, Prince Charles, 72, is currently first in line to the throne, followed by his eldest son Prince William, 38.

Prince Edward has plunged down the line of succession (Image: Getty)

Prince Harry, 36, is sixth in line to the throne, followed by his 20-month-old son, Archie.

JUST IN: Meghan’s ‘deal or no deal’ ultimatum to Queen unveiled

Princess Anne, 70, lies much further down the lineage, even though she is the Queen’s second eldest.

This is because up until 2013, the British line of succession was governed by the system of male primogeniture, whereby younger sons have precedence over their older sisters.

But in 2013 the Succession to the Crown Act was passed which ended the male preference.

The change in law applied to those born after October 28, 2011, and enabled Princess Charlotte, five, to become fourth in line to the throne, ahead of her younger brother Prince Louis.

Prince Edward is now 12th in line to the throne (Image: Getty)

But as the amendment to the Succession Act only affected those born after October 2011, Princess Anne’s lineage remains unchanged.

Buckingham Palace announced the news of Princess Eugenie’s son yesterday and said in a statement: “Her Royal Highness Princess Eugenie was safely delivered of a son today, 9th February 2021, at 0855hrs at The Portland Hospital. Jack Brooksbank was present. The baby weighs 8lbs 1oz.

The Princess shared the first image of the youngster on her Instagram account, which featured just the baby’s tiny fingers.

Even though his mother is a princess, the royal baby will not be an HRH nor hold a title, unless the Queen decides otherwise.

This is because he was born down the female line of the Royal Family.