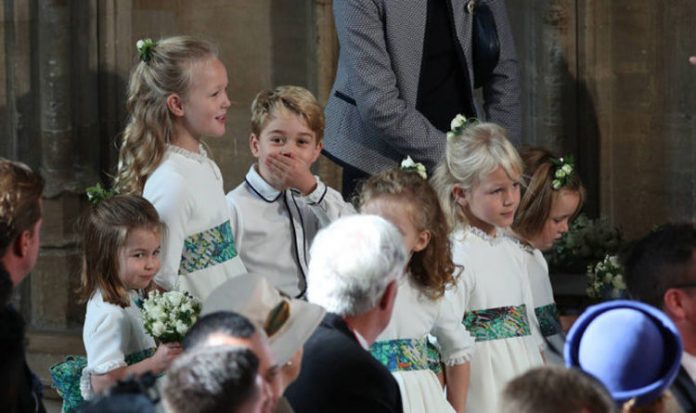 The cute five-year-old was photographed looking dapper in a smart little suit after bagging a staring role with Princess Charlotte, three, for the royal wedding in Windsor today.

Prince George was seen laughing with his cousin Savannah Phillips – the duo made for a boisterous pair earlier this year at Trooping the Colour laughing and waving at the crowds.

And it appeared George was in a playful mood today as he laughed with Savannah who was pretending to play music.

Joining Charlotte as bridesmaids was none other than Robbie Williams’ daughter Theodora, known as Teddy, who looked angelic.

The two were part of an army of bridesmaids consisting of Savannah, seven, and Isla Phillips, six, the daughters of Autumn and Peter Phillips; Zara and Mike Tindall’s daughter Mia, four, and Eugenie’s goddaughter Maud Windsor, the daughter of Lord Frederick Windsor.

The Queen’s youngest grandchildren, 14-year-old Lady Louise Mountbatten-Windsor, and 10-year-old James, Viscount Severn, who are the children of the Earl and Countess of Wessex, are taking on the roles of special attendants today.

They have been tasked with keeping the younger bridesmaids and page boys in line, along with Prince George and Princess Charlotte’s nanny Maria Borrallo.

Princess Charlotte takes a tumble as she falls over atWedding