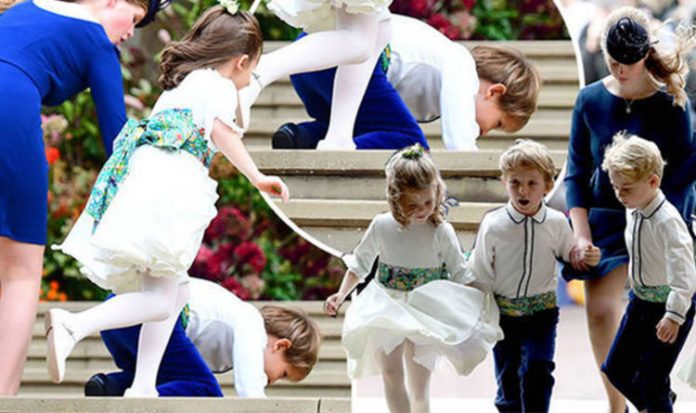 As the cutechildren walked up the steps fellow page boy Louis de Givenchy lost his footing and fell over.

The gusts proved too strong for fellow pageboy Louis who was knocked to the ground by strong winds.

Royal insider James Brookes originally predicted Kate would take care of the pageboys and bridesmaids but instead Lady Louise Windsor came to the rescue of the little ones.

Mr Brookes exclusively told Express.co.uk: “We saw that with Harry and Meghan, Kate did step up and take a role there.

“So I wouldn’t be surprised if we do see her play the role of guardian as much to not only George and Charlotte to make sure they behave, but also to make sure any of the other pageboys and flower girls are on their best behaviour too.

“So fingers crossed there’s no childcare issues on the day.”

Royal family members arrived at Windsor, with Storm Callum causing fascinators to blow off the heads of multiple A-list celebrities earlier this morning.

BBC Breakfast weather host Carol Kirkwood said: “It’s going to be windy wherever you are, plus you’ve got the rain.

“Now we’ve already got the rain and the gusty winds coming in from the west, gusts currently about 50-60 mph.”

An extended This Morning special, ‘This Morning at theWedding’, was shown from 9.25am until 12.30pm on Friday, October 12.

The programme was fronted by Eamonn Homes and Ruth Langsford live from Windsor.

From 11am, the coverage switched to inside St George’s Chapel for a live broadcast of the ceremony.

ITV said in a statement: “This Morning At TheWedding will capture the atmosphere and arrivals at St George’s Chapel, with Eamonn and Ruth joined by guests, commentators and experts for this special extended programme.”

Eugenie and Jack’s wedding carriage procession was made in the Scottish State Coach, a carriage with a roof rather than opened topped, as rain and strong winds were forecast for the wedding day.

The carriage was pulled by four Windsor Grey horses – Plymouth, Milford Haven, Tyrone and Storm – the same horses that pulled the carriage the Duke and Duchess of Sussex travelled in for their wedding day carriage procession.

Windsor Grey horses play an important role in the ceremonial life of thefamily and the nation, and have been drawing the carriages of successive monarchs and members of the monarchy since Queen Victoria’s reign.

Asked if Prime Minister Theresa May had any message for the couple, a Downing Street spokeswoman said: “She wishes them the best for the future and hopes they have a lovely day.”