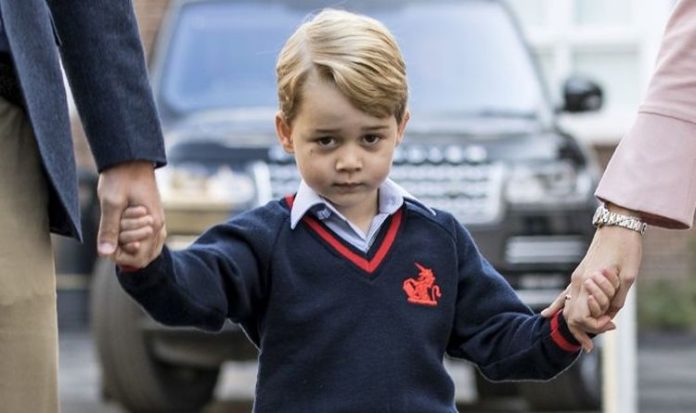 During Channel 5’s documentary, ‘Secrets of the Royal Palaces’ Simon Vigar and Ken Wharfe discussed Prince George and Savannah Phillips’s antics during the 2018 Trooping of the Colour ceremony. Savannah Phillips was seen putting her hand over the Prince’s mouth during the ceremony.

The royal commentator said: “Harry was a joker and still is.

“The younger children like Beatrice and others are the same.

“I think it is what children do.”

“And I think that is the parents probably having a quiet agreement beforehand that they did not want to take any focus away from the Queen.”

Footage of George and Savannah went global with the pair’s cute antics.

One royal fan said Savannah “stole the show” while another said it was “absolutely hilarious”.

Prince George is currently third in line to the throne. However, one critic of the royal family said he would understand if the young prince wanted nothing to do with the role of monarch.

Graham Smith, the CEO of Republic, told Express.co.uk that Prince George should be free to make his own choices regarding whether he wants to be an active part of the monarchy.

Mr Smith said: “It could be 60 years before he gets on the throne and I would hope that the throne is gone by then.

“Regardless of when he might be on the throne, George is a young boy who has every right to live his life as he wants to live it.”

The Republic CEO added: “Every child should be treated the same and this is the fundamental point.

Mr Fitzwilliams said: “It makes absolutely no sense to claim that ‘all royal children should be treated exactly the same as any other child’.