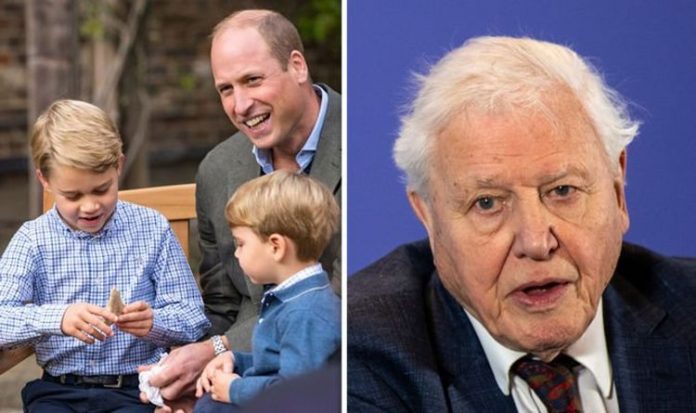 Sir David, 94, visited the Cambridges at Kensington Palace last weekend and, while he was there, gave the young prince a 23-million-year-old shark tooth belonging to a megalodon. The nature documentary-maker said he discovered the fossil during a family holiday to Malta in the Sixties. However, this caused some uproar in Malta, with Maltese culture minister Jose Herrera saying that the tooth should be returned to their country and put in a museum.

He later seemed to change his mind and decided to let the seven-year-old keep his present.

Mr Herrera told Maltese media this week that no action was initiated or will be taken on the issue.

One royal expert has compared this dispute to that of the Elgin Marbles.

READ MORE: Brutal US tax could restrict funds for Archie from Harry

This week, Ms Gripper was joined by Mirror Online lifestyle editor Zoey Forsey, who noted that George “wasn’t friends with Malta for a while, but I think all is forgiven now.

The podcast host added it is very relevant to be having discussions like this amid Black Lives Matter protests and re-examining our history and colonialism.

The Elgin Marbles are in the British Museum (Image: GETTY)

There have been numerous calls in recent years, for example, to have various artefacts currently in the British Museum returned to their country of origin.

The British Museum contains many artefacts that were obtained all over the world during the height of the power of the British Empire and many of them taken without the consent of the people who made them, or whose land it came from.

One of the most famous examples is the Elgin Marbles, Classical Greek marble structures originally part of the Parthenon and other buildings on the Acropolis of Athens but are now on display at the British Museum.

From 1801 to 1812, agents of Thomas Bruce, 7th Earl of Elgin removed about half of the surviving sculptures of the Parthenon and transported them by sea back to Britain.

The Greek government has been lobbying to have the Elgin Marbles repatriated for decades (Image: GETTY)

The actions of the Earl of Elgin, in removing the structures and bringing them to the UK was likened to vandalism and looting by contemporaries like Lord Byron.

In recent years, the Greek government has made efforts to have the marbles repatriated.

In 2014, UNESCO offered to mediate between Greece and the UK to resolve the dispute, but this was turned down by the British Museum on the basis that UNESCO works with governmental bodies, not trustees of museums.

Ms Gripper said: “I think it is interesting how everything comes up and how with Black Lives Matter and revisiting history and all that kind of stuff that we’ve been talking about over the summer.

“And now it’s just come from an elderly gentleman in his Nineties, something that he picked up on his holidays years ago innocently as an interested nature type person that now it’s suddenly become the Elgin Marbles.”

“Even older than the Queen!

“And he presented it to Prince George when he popped over to Kensington Palace, which was lovely.

AC Milan fans hold up a banner demanding the return of the Parthenon Marbles (Image: GETTY)

“But obviously Malta saw it on the news and said ‘hang on, that’s from here, we should have it back’

“So their culture minister got involved and said he was going to set the ball rolling to get it back so they could put it on display in a museum.”

“But I think after a couple of days, it all calmed down a bit and Malta said George can keep his present.”

In adorable pictures of the family meeting the environmentalist, George looked absolutely captivated by the tooth.