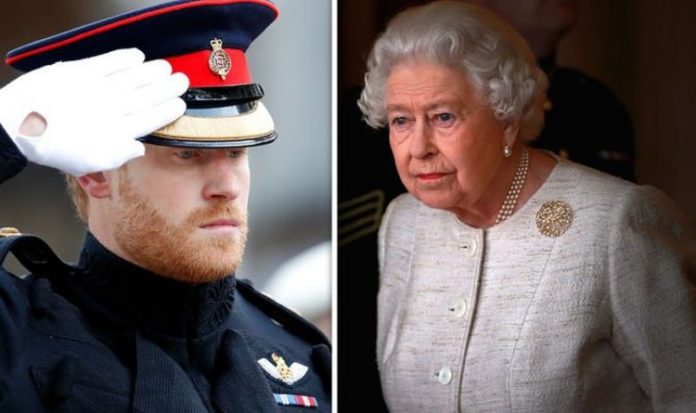 Prince Harry, 36, is understood to have been deeply upset by the Queen Elizabeth II’s decision to withdraw his honorary military titles in the wake of his and Meghan Markle’s royal stepdown. As well as serving in the British Armed forces for a decade, Harry also held several ceremonial military positions as a senior royal.

Harry drew on his experience in the military in a new statement endorsing Australian mental health project Peak Fortem.

The Duke’s statement which was shared by Peak Fortem on Twitter, read: “Our mental fitness is one and the same as our physical fitness.

“Serving in the military, I saw firsthand how critical it is to train your mind as a muscle – not only to endure challenges and stresses but to excel, grow and build resilience in all aspects of life.

“Peak Fortem is the product of teamwork, dedication and a commitment to supporting and strengthening communities of all kind – values upheld by Australia’s first responders.”

The statement added: “With Peak Fortem, we are witnessing the next step in a global movement towards mental fitness.”

According to a royal expert, Harry’s latest statement is a continuation of the work he has been doing to tackle the stigma around mental health in recent years.

Royal commentator Richard Fitzwilliams told Express.co.uk: “When Harry opened up about how the death of his mother had affected his mental health, he was talking about a 20-year struggle during which he sought counselling.

“In doing so he gave a uniquely personal insight into the life of a senior member of the Royal Family.”

He said: “His message endorsing an Australian mental health initiative for frontline workers is also significant as it underlines the commitment he feels to the Commonwealth.

“He and Meghan are President and Vice President of the Queen’s Commonwealth Trust and it will be interesting to see how their activities are planned when the pandemic is over and what they intend to do for Commonwealth countries.”

The expert said: “Harry’s mention of serving in the military is extremely significant too as we know how much he values his time in the army and it is a particularly sensitive issue when he has had his military links suspended as part of the Sandringham Agreement with the Queen.”

Harry and Meghan’s royal exit agreement, including whether Harry would have his military titles re-instated, was due to be reviewed by the Queen in March.

However, it is now understood the review will not take place as there is “no need” and the Queen is thought to be happy with the Sussexes’ current situation.

Since leaving the Fold, Meghan and Harry have relocated to the USA and settled in Santa Barbara, California with their son Archie Harrison.

They have gained financial independence from the Royal Family after signing lucrative deals with both Spotify and Netflix.

The couple launched their new Archewell initiative at the start of the year after it was postponed amid the coronavirus pandemic.