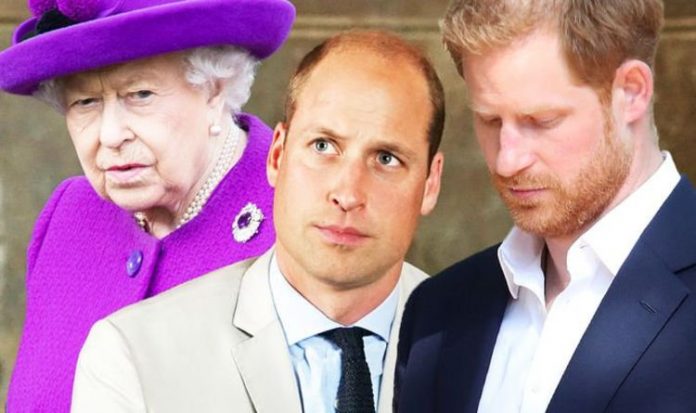 Prince Harry and Meghan Markle have not stepped foot on UK soil since March, their visit fleeting, where the pair arrived to mark the annual Commonwealth Day celebration at Westminster Abbey with the Queen. Despite renouncing their royal titles and jetting off to North America in January, the pair have remained well-placed in the public’s eye. The focus has largely revolved around how the couple will finance their lifestyles.

Royal commentator Penny Junor this week said the pair appear to have no plans to return to the UK and seem not to seem bothered by leaving the “Firm”.

Writing in The Mirror, she said: “In the past few months, Harry and Meghan have burnt some significant bridges that may be beyond repair.

“Right now, that doesn’t seem to bother them. And I can’t see Meghan ever wanting a way back. What she discovered in her brief spell as a working member, is the Royal Family is no place for someone with political ambition.

“This centuries-old institution provides an unparalleled platform for charitable work – to change and improve people’s lives – but it is not the springboard for changing the world – however burning and evident the need.”

Prince Harry The royal revealed he had ‘wanted out’ of the family even before leaving in January (Image: GETTY)

Many have noted that it is no surprise that the couple are unlikely to ever return to their royal roles given Harry’s clear longing, even before January, to shed his royal ties.

This was especially true of his 2017 interview with Angela Levin during which he revealed on several occasions how he “wanted out” of the Royal Family in the years preceding.

He said the time he spent in the Army, where he was “just Harry”, was “the best escape I’ve ever had”.

Although, he admitted to reevaluating his decision to leave, opting to stay on in order to “do good”.

JUST IN: Prince Harry title: How Harry received his earldom

Meghan Markle news: Harry and Meghan have not touched ground in the UK since March (Image: GETTY)

He explained: “I spent many years kicking my heels and I didn’t want to grow up.

“I felt I wanted out but then decided to stay in and work out a role for myself,” signalling his support for and loyalty to the Queen.

On the family, he said: “We don’t want to be just a bunch of celebrities but instead use our role for good.”

Many times has Harry spoken fondly of his time in the Army.

He was devastated in 2007 when, after ten weeks in Afghanistan’s Helmand province, his position was leaked by a magazine and he had to be hastily withdrawn for security reasons.

He said: “I felt very resentful.

“Being in the Army was the best escape I’ve ever had.

Harry latest: Harry revealed during a 2017 interview how he had to ‘up his game’ on meeting Meghan (Image: BBC)

“I felt as though I was really achieving something.

“I have a deep understanding of all sorts of people from different backgrounds and felt I was part of a team.”

Despite his prior assurances of being committed to the Firm, Harry has since married, had his first child, and appeared to throw away his familial ties, forging a new life abroad.

He met former Hollywood star Meghan on a blind date in 2016.

The pair hit it off from the start and, two years later, married in the biggest royal wedding since William and Kate’s in 2011.

Since, relations have soured between the newly weds and the rest of the family.

The alleged bad blood was furthered after the publication of ‘Finding Freedom’ by royal commentators Omid Scobie and Carolyn Durand.

Although the writers did not talk to any members of the Royal Family, they claim to have carried out over 100 interviews with close friends of Meghan and Harry along with other royal insiders.

Royal titles: Meghan and Harry renounced their titles earlier this year on moving to the US (Image: GETTY)

The biography pits Kate and William against Meghan and Harry, claiming that the Cambridge’s were “snobs” over the former Suits star’s background.

The revelations reportedly wedged an already growing gap between the two brothers.

Their relationship in particular has flown south in recent years, and earlier this week, The Mirror reported that Harry “took to heart” a picture of William, Prince George, Prince Charles and the Queen stood together for New Year’s picture earlier this year.

The publication cited royal author Robert Lacey as having said the photo was Charles’ idea as he wanted to show his new idea of a “slimmed down monarchy”.