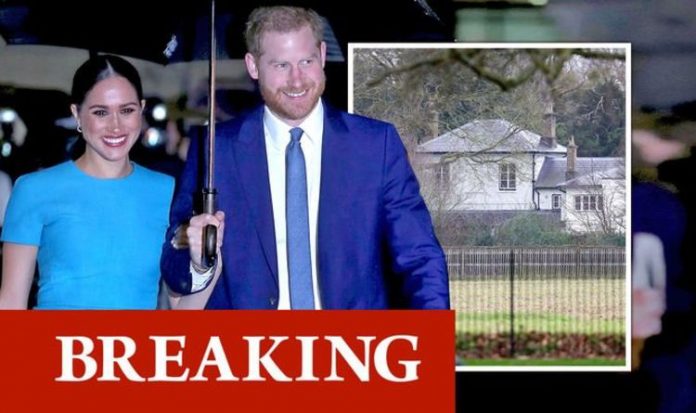 The money, which was used to refurbish their official royal residence, has been returned to the Sovereign Grant. The couple stepped down from royal duties earlier this year in a bid to be financially independent.

The Duke and Duchess of Sussex’s office confirmed the money spent on Frogmore Cottage was returned in full following speculation over the weekend.

Situated in Windsor, the historic landmark was loaned to the couple by the Queen and remains part of the Crown Estate.

The couple moved into the property in 2018 and, despite repaying the money spent of refurbishments, it will remain their official UK residence.

It is believed they agreed with the Royal Family to return the money for renovations when they signed what is known as the Sandringham Agreement in January.

The couple moved into Frogmore Cottage in 2018 (Image: Getty)

A spokesperson for the Duke and Duchess of Sussex said: “A contribution has been made to the Sovereign Grant by The Duke of Sussex.

“This contribution, as originally offered by Prince Harry, has fully covered the necessary renovation costs of Frogmore Cottage, a property of Her Majesty The Queen, and will remain the UK residence of The Duke and his family.”

Last year’s royal accounts showed the cost of the renovations – paid for from taxpayers’ money – was £2.4 million.

Harry and the Duchess of Sussex agreed to pay back the money as part of the plans drawn up when they quit as senior working royals.

It was initially believed that they would be paying back an estimated £18,000 per month – meaning it would take 11 years to settle the bill.

The renovations sparked public backlash after it was reported five apartments were knocked together to reform the cottage, while beams, floors and the water and gas systems were all replaced.

Frogmore Cottage, a historic Grade II listed house, was converted into a four-bedroom and nursery, single family home during the renovations.

Meghan and Harry shocked the world this year after announcing they are stepping down as senior members of the Royal Family.

The couple moved to Los Angeles and have been staying there during the coronavirus outbreak.

Since stepping away, the couple’s main income had been from Harry’s father Prince Charles.

But according to reports, they are no longer receiving money from the Prince of Wales.

The couple live in Los Angeles with their son (Image: Getty)

Last week, Meghan and Harry signed a multi-million dollar Netflix deal which will give them a secure income for the next five years of so.

The deal will see the couple producing a range of programmes for the streaming giant.

Although no figure has yet been confirmed, it is believed to be estimated around $50 to $100 million over roughly five years.

The Sussexes released a statement regarding their Netflix deal, which read: “Through our work with diverse communities and their environments to shining a light on people and causes around the world, our focus will be on creating content that informs but also gives hope.”

Harry and Meghan to follow footsteps of Obamas (Image: Getty)

But, royal commentator Camilla Tominey pointed out that many insiders are wondering “what the Sussexes will be selling in return for such a vast sum” of £75-£112million contract.

Michelle Obama took part in an intimate documentary, Becoming, which took a close look at her life.

Ms Tominey asked: “Are the Duke and Duchess going to have to be prepared to do the same?

“And to what extent are the Sussexes going to have to sell themselves, as opposed to the causes closest to their hearts?”