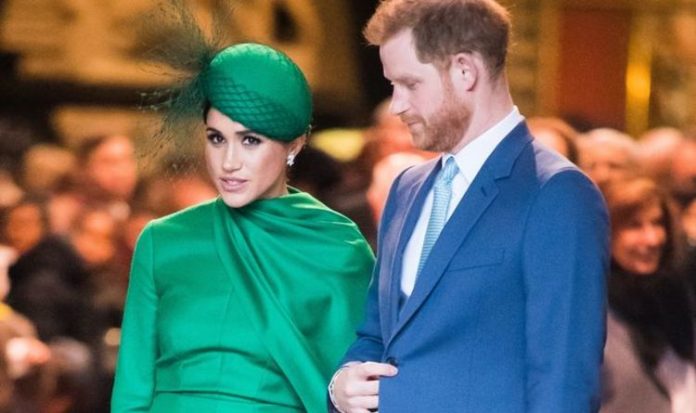 The Duke and Duchess of Sussex have revealed their organisation Archewell is supporting the UCLA Centre For Critical Internet Inquiry (C2i2). Speaking on talkRADIO, Emma Webb claimed Prince Harry and Meghan Markle trying to “censor free speech” is a serious crisis.

Ms Webb said: “For all of these large corporations and a Prince and his wife to be using their position to censor people they disagree with on the basis of an ideology which is disputed and should not be accepted as if it is somehow politically neutral.

“That goes beyond winding up normal people.

“I think that this is a serious crisis of free speech and it poses a significant threat.”

Last week the general secretary of the Free Speech Union, Toby Young, also criticised the move made by Meghan Markle and Prince Harry.

Mr Young said: “The people the Duke and Duchess of Sussex are funding are hard-left political activists who want to censor anyone who challenges their woke agenda.

“Under the guise of protecting people from ‘hate speech’, they want to cleanse the internet of people they disagree with.

“Does Prince Harry know who he’s gone into business with?”

He added: “As a member of the Royal Family, Harry should be standing up for fundamental British values, such as the right to free speech, not aligning himself with people who want to take that right away from people they disagree with.”

“They have, as is evident from their deals with Netflix and Spotify, enormous appeal and a worldwide reach.”

Mr Fitzwilliams also stated that as they retain their royal titles there are still some areas that the Duke and Duchess of Sussex should not wade into.

He said: “Clearly there are boundaries which they ought not to cross and this matter will be looked into when the agreement made with the Queen at Sandringham is reassessed before the end of March.

“If they were not royal, the interest in them would be minimal and this is simply a fact of life.”