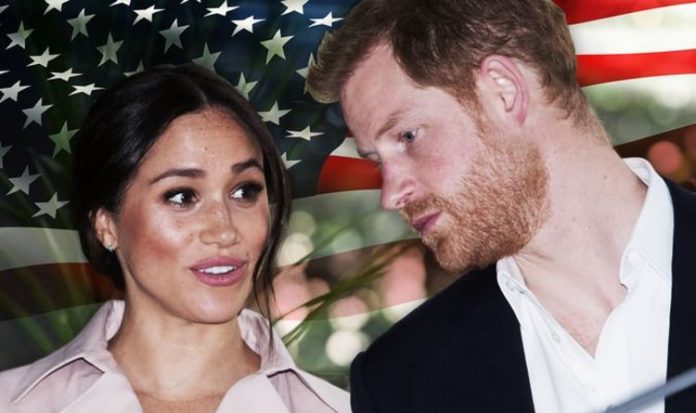 The couple all-but endorsed Democratic presidential nominee Joe Biden in a surprise joint speech. Prince Harry spoke of his inability to vote in the USA for the upcoming election, as well as the fact he had never voted in an election before back at home in the UK. Speaking in a Time 100 video message, Meghan called the presidential race the “most important election of our lifetime”, as the couple appealed to Americans to use their right to vote.

Meghan said: “We’re just six weeks out from election day and today is National Voter Registration Day. Every four years we are told the same thing, that this is the most important election of our lifetime. But this one is.”

She continued: “When we vote, our values are put into action and our voices are heard.

“Your voice is a reminder that you matter, because you do and you deserve to be heard.”

The couple did not officially endorse Joe Biden, however Meghan has been an outspoken critic of President Donald Trump and has voiced her support for Kamala Harris being picked as the running mate earlier this year.

Their comments, in particular from the Duke of Sussex, have ruffled some feathers on social media and have even sparked a response from President Trump himself, who expressed his dislike for the Duchess and wished Prince Harry well.

Buckingham Palace has sought to distance itself from their comments, with a spokesperson highlighting that Harry’s remarks were made in a “personal capacity.”

Members of the Royal Family, at least according to traditional protocol, do not vote and are not permitted to become involved in political matters.

While there is no law explicitly preventing the royal family from voting in UK elections, doing so would be an unacceptable breach – and is a rule members of the firm are usually particularly scrupulous with.

Many have been unhappy with their foray into political life – while Meghan, not a royal by birth, causes less of a stir, it is Prince Harry that many have an issue with expressing political opinion.

That being said, a foray into politics is not unheard of from Royal Family members.

Princess Diana – who like Harry and Meghan became detached from the monarchy – was known for her campaigning on land mines, once allegedly describing the UK government’s policy as ‘hopeless’.

While Prince Harry has clearly sought to emulate his mother in a variety of ways, the question remains for many people about how, as a British citizen, Harry is seeking to place himself into the politics of a country he has limited ties with.

Article I, section 9, clause 8 of the US constitution, also referred to as the emoluments clause, states: “No title of nobility shall be granted by the United States: and no person holding any office of profit or trust under them, shall, without the consent of the Congress, accept of any present, emolument, office, or title, of any kind whatever, from any king, prince, or foreign state.”

A work visa, the most common being a H1 visa, is an unlikely route for the Duke as it requires proof of professional skills.

Prince Harry could obtain an O-1 visa for “Individuals with Extraordinary Ability or Achievement” – while being famous alone wouldn’t be enough of a claim, he could claim for his philanthropic work providing he had a sponsor stateside.

According to lawyer Glenn Bank, Harry’s past misdemeanors could catch up with him.

It has been hard for many to forget the time he dressed up as a Nazi as a teenager – or appearing naked in Las Vegas party pictures – both of which caused media storms.

While these events do not amount to crimes of ‘moral turpitude’, a category under which some applications can be denied, Mr Bank told the Guardian: “He has to show good moral character, which means no criminal act or violation of immigration law or act of persecution that would make him inadmissible.”