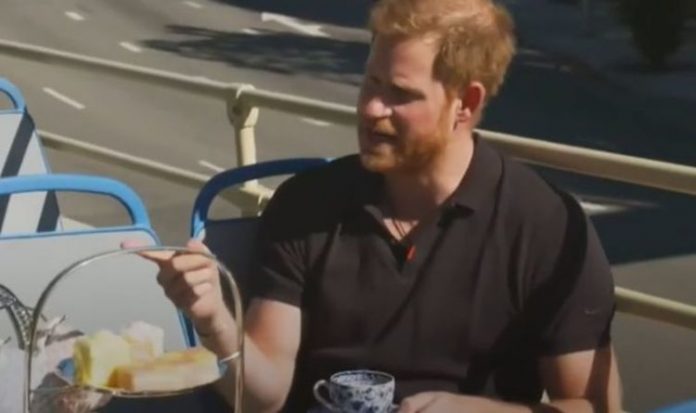 Prince Harry and James Corden covered an arrange of topics during the Duke’s interview on The Late Late Show. During one clip the pair drank tea on a bus as it drove through California’s Interstate 405.

During the interview, the bus swerved leading to tea falling on the Duke of Sussex.

Prince Harry replied: “James you have got carpool karaoke, maybe I can do English tea on the 405?”

“Get in on Netflix, it is an absolute winner.”

The Duke of Sussex added: “That would be cool, there is an idea.”

The bus then swerved and the tea fell onto the Duke of Sussex.

Prince Harry swore as he said: “There is tea on the floor, that is not a good idea.”

Another tweeted: “James Corden and Prince Harry was a duo I never really thought I needed until now.”

A third wrote:  “I was a fan Prince Harry before but after watching him and James Corden, I love this guy even more.”

A fourth tweeted: “Prince Harry just gave one of his most candid interviews ever during an appearance on The Late Late Show with James Corden.”

A fifth said: “The James Corden and Prince Harry interview/segment is brilliant.”