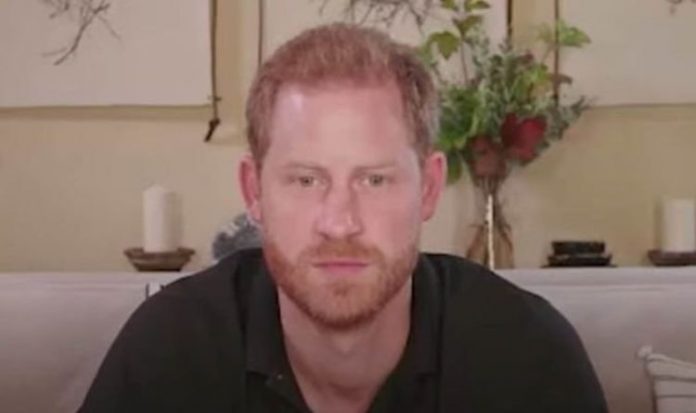 Prince Harry made the claim as he spoke to activist Patrick Hutchinson about racism, coronavirus and mental health. The Duke of Sussex highlighted the impact months of lockdown are having on people’s mental health and how important it is to remain active and in touch with others.

But Harry received a social media backlash after claiming men “especially” were struggling.

Harry, an advocate for mental health and ending the stigma surrounding it, asked Mr Hutchinson how he kept himself mentally and physically fit during the months of self-isolation he and his family experienced.

Mr Hutchinson, who became famous in June after being photographed rescuing counter-protester Bryn Male during a heated clash at an anti-racism march, said physical exercise is helping him to stay “physically and mentally sharp”.

Similarly, he added, holding Zoom calls with quiz sessions with his friends gave him something to look forward to at the height of lockdown.

Prince Harry has been accused of being ‘patronising’ by a royal expert (Image: GQ)

Prince Harry said to be “glad” to hearing Mr Hutchinson positive experience, adding many men have suffered during the lockdown.

But his following comment was taken as an affront by one royal expert.

During the 40-minute chat recorded for the GQ Heroes conference, Harry said: “Because for so many people – but men especially, I guess – everyone’s been suffering from some form of isolation over the last eight, nine months.

“But for men who are isolated by themselves this can be a really dark place, unless you know the different solutions or different distractions that you can put into your life: whether it’s going for a great walk or a run or just doing something that keeps you mentally and physically fit. So I love that.”

This remark has been criticised by royal commentator Angela Levin, who believed the Duke had been “very patronising to women”.

She wrote on Twitter: “Oh dear Harry … says struggle of lockdown is felt ‘especially’ by men. Very patronising to women.”

Prince Harry has often publicly spoken in favour of women’s rights and gender equality over the past few years.

While visiting Tomorrow’s Women Wirral in Birkenhead, the Duke said he was “a feminist”, according to the charity’s CEO Angela Murphy.

His wife Meghan, a long-time supporter of gender-equality, reportedly called the Duke a feminist during her first-ever royal engagement in January 2018.

23-year-old Jessica Phillips recalled telling Meghan she liked the idea of having a feminist in the Royal Family.

Meghan, People magazine wrote, replied while pointing at her then-fiancé: “He’s a feminist too.”

During his chat with Mr Hutchinson, Prince Harry also touched upon unconscious racial bias in the UK.

The Duke mentioned the wave of complaints Ofcom received in relation to the Black Lives Matter-inspired dance routine performed by Diversity and Ashley Banjo at Britain’s Got Talent in September.

He said: “You talk about unconscious bias to start with, which you and I both know is a huge thing globally.

“But I think with the Ashley Banjo stuff, we – Meghan and I – spoke to him shortly after that whole process, that whole moment in his life and Diversity’s life.”

Prince Harry spoke from his home in California (Image: GQ)

“But once you realise or you feel a little bit uncomfortable, then the onus is on you to go out and educate yourself, because ignorance is no longer an excuse.

“And unconscious bias, from my understanding, having the upbringing and the education that I had, I had no idea what it was.

“I had no idea it existed. And then, sad as it is to say, it took me many, many years to realise it, especially then living a day or a week in my wife’s shoes.”