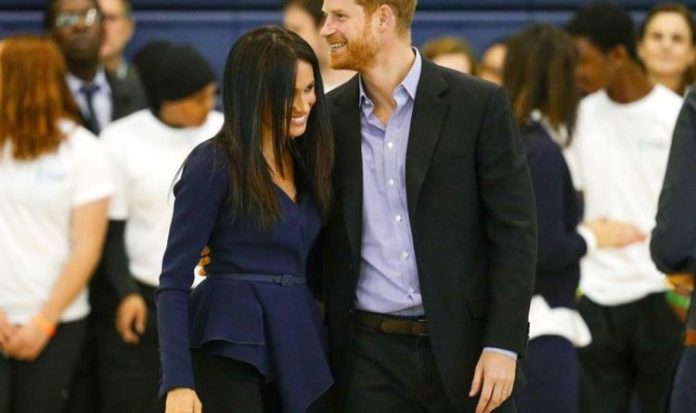 The Duke and Duchess of Sussex launched their Archewell Audio podcast last year after signing a multimillion-dollar deal with Spotify. But an expert in language has suggested Harry is copying Meghan’s Americanisms.

She told Cosmopolitan: “The expression ‘you guys’ comes up, an American phrase that Harry used to address listeners in both the podcast teaser and during the podcast.

“In the premiere episode, he even uses the typically American term ‘awesome’ – something which elicits a giggle from his American wife when used.

“Harry says things like ‘love always wins’ and ‘the power within us’: two very positive, uplifting phrases which many of us would associate with the optimistic attitude of our cousins over the pond.”

Ms Dorman added how Harry could be using these phrased to “be understood better by the American press”.

But argued his language has been directly influenced by the amount of time he spends with his wife.

She added: “It could be that Prince Harry has started to borrow American phrases and words in order to fit in and be understood better by the American press, and this could become so habitual that he uses these words when speaking to Brits and Americans alike.

“Or he may just be mimicking his wife: interacting at a close level with someone all the time can cause us to pick up their speaking habits.”

This comes after other royal experts have weighed in on the Duke’s change in speech since leaving the UK.

She said Harry’s accent, at times, “would probably sound right in the Queen Vic in Eastenders”.

Announcing their podcast, Meghan and Harry said: “What we love about podcasting is that it reminds all of us to take a moment and to really listen, to connect to one another without distraction.

“With the challenges of 2020, there has never been a more important time to do so because when we hear each other, and hear each other’s stories, we are reminded of how interconnected we all are.”

The first episode was released on December 29 but fans of the Sussexes are calling for more after two months of waiting.

Meghan and Harry left the Firm in a bid to become financially independent.

As well as signing the deal with Spotify, they have also landed a multimillion-dollar deal with Netflix.