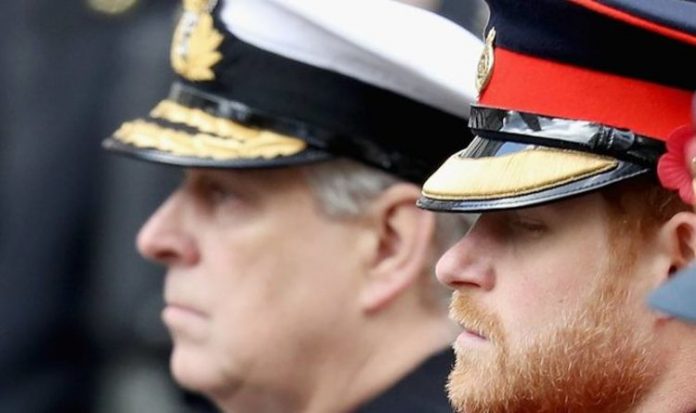 Prince Harry: Rod Liddle hits out at Duke over statement

The Duke of York stepped back from his public duties “for the foreseeable future” following an embarrassing BBC Newsnight interview about his links with paedophile Jeffrey Epstein. However, he still retained military honours including Commodore-in-Chief of the Royal Navy’s Fleet Air Arm and Colonel-in-Chief of multiple British Army units. This is a stark contrast to Meghan Markle and Prince Harry, who both recently were stripped of their royal titles by the Queen after quitting as senior royals, including Harry’s role as captain general of the Royal Marines.

Dickie Arbiter, a former spokesman for the Queen, said it “beggars belief” Harry could not keep his beloved roles while Andrew was allowed to.

“It beggars belief that Harry has been stripped of his position and Andrew hasn’t.”

Prince Andrew stepped back from his royal role in November 2019 and also took a backseat from most of his charities and patronages following widespread backlash.

Prince Andrew has been criticised for keeping his titles while Harry lost his (Image: GETTY)

He also admitted that “the circumstances relating to my former association with Jeffrey Epstein have become a major disruption to my family’s work”.

But she hinted Andrew may want to return to the royal frontline to “serve his country”.

She wrote in day Times: “The Prince’s absence from the celebration on June 12 marking the Queen’s 95th birthday will be a blow to his hopes of returning to public life after stepping back because of his friendship with the convicted paedophile Jeffrey Epstein, who killed himself in prison in New York.

Prince Andrew stepped back from his royal duties in November 2019 (Image: GETTY)

“Trooping the Colour is set to be the first big significant royal event since the outbreak of the pandemic to include all the pomp and pageantry.

“Andrew was at the heart of the event in 2018 and 2019, riding alongside the other royal colonels — the Prince of Wales, the Duke of Cambridge and the Princess Royal.

“His blushes were spared last year when the parade was scaled back and moved to Windsor for the first time during the Queen’s reign.

“Sources close to Andrew, however, have said that he intends to return to public duties and ‘serve his country’ again, a desire that does not appear to be shared by the Queen or the rest of his family.”

Meghan Markle and Prince Harry were stripped of their titles by the Queen (Image: GETTY)

Harry and Meghan are said to have wanted to keep their roles with the military, arts, Commonwealth and sporting organisations.

A source said Harry and Meghan had “absolutely, no question” they wanted to retain the positions they had lost.

They said: “They do respect the decision but they always made clear they were committed to doing the roles.”

A spokesperson for the Duke and Duchess said that they have “offered their continued support to the organisations they have represented regardless of official role”.

They added: “We can all live a life of service.

Harry reportedly told the Commandant General Royal Marines, Matthew Holmes, last March that he was “devastated that I am having to step down,” before adding: “I feel I’m letting people down, but I had no choice.”

Meghan later told a friend the decision to strip Harry of his military honours was “so unnecessary”, according to the biography Finding Freedom.

Since Harry and Meghan quit as senior working royals, they have signed deals with Spotify and Netflix, which is estimated to be worth more than £100million.

Buckingham Palace said all were “saddened” by Harry and Meghan’s decision to permanently step down as working royals, but they remained “much-loved members of the family”.

The palace said in a statement: “The Duke and Duchess of Sussex have confirmed to Her Majesty the Queen that they will not be returning as working members of the royal family.

“Following conversations with the duke, the Queen has written confirming that in stepping away from the work of the Royal Family it is not possible to continue with the responsibilities and duties that come with a life of public service.

“The honorary military appointments and royal patronages held by the duke and duchess will therefore be returned to Her Majesty, before being redistributed among working members of the royal family.

“While all are saddened by their decision, the duke and duchess remain much-loved members of the family.”