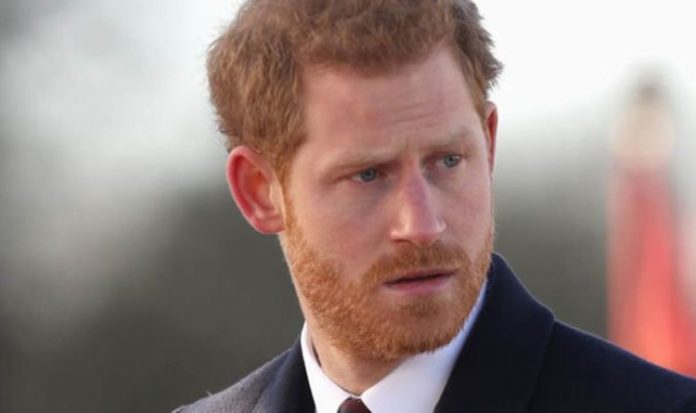 Prince Harry and Meghan Markle announced one year ago their decision to reshape their roles within the Royal Family. Setting out their plans for the future, they outlined a part-time role as working royals, paired up with financial independence and the ability to pursue profitable ventures.

According to the statement they issued on Instagram on January 8 last year, the Duke and Duchess of Sussex wanted to retain their titles and patronages in full.

However, their plan backfired as it became clear Buckingham Palace would not accept a half-in, half-out solution.

Prince Harry was also stripped of his three honorary military titles, including the honorary rank of Captain General of the Royal Marines inherited by Prince Philip in 2017.

This has likely been a painful blow for the Duke of Sussex, who spent 10 years in the Army and served two rounds in Afghanistan.

Outlining how important his work with service personnel and veterans is for Prince Harry, royal author Hugo Vickers told the Daily Telegraph: “He has been telling friends that he still can’t believe this has happened.

“He misses the camaraderie of being in the forces.

“He was in a happy place when he was serving in the Army, then he met Meghan and since then life has been great.

“But I don’t think he foresaw things turning out quite as they did.”

Prince Harry has vowed not to abandon his military links since Megxit began last year.

The Duke remains at the helm of the Invictus Games, the multi-sport tournament dedicated to sick and injured military personnel and veterans, and throughout the past few months he has been in touch with some of its members.

Earlier this week, the Invictus Games Foundation released a video in which the Duke, joined by Invictus athletes, announced the games had to be pushed back yet another year – but the foundation would find other ways to support its members.

In the spring of 2020, Harry also saw a project he has been working on for years coming to completion – the launch of HeadFIT, a platform providing military personnel with round-the-clock access to self-help tools to enhance mood, drive and confidence.

From Los Angeles, the Duke also hailed the Ministry of Defence’s decision to provide Army personnel with mental fitness training on top of their physical fitness one.

Harry said: “Over the years it has been an honour to work alongside the service chiefs and the Ministry of Defence on projects such as HeadFIT, and I am delighted to see such a significant step to protect and strengthen the potential and resilience of our military.”

The Duke, whose plans to return regularly to the UK have been dashed by the coronavirus pandemic and the travel restrictions that followed, marked Remembrance Sunday in California.

Accompanied by Meghan, he visited the Los Angeles National Cemetery and laid a wreath while wearing his medals.

His firm commitment to the military was also stated at the High Court earlier this week, during a brief hearing which put an end to the lawsuit the Duke won against Associated Newspapers.

His lawyer stated: “The Duke’s commitment to the men and women who have put their lives on the line, to those who have made the ultimate sacrifice for their country and to military families, is steadfast and unquestionable.”

The Queen is expected to fill the three posts left vacant by Prince Harry after the end of the 12-month Megxit transition period in March.

However, one friend of the Duke said he is determined to retain these roles.

They told the Telegraph: “His military work is one of the most important things to him. Of course he wants to keep them.”