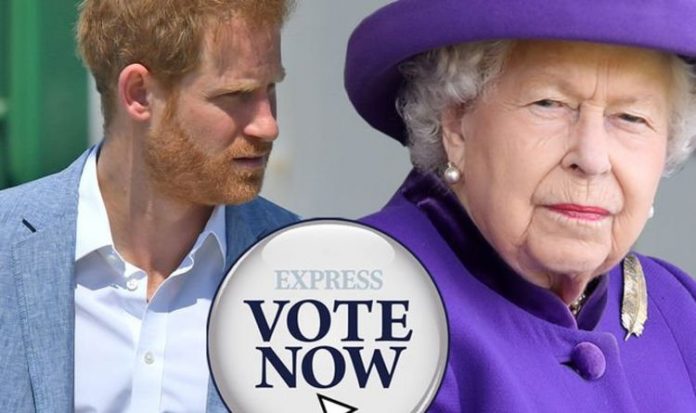 Vote in our poll and let us know more about what you think in the comment section. The Duke of Sussex, who has quit royal duties with Meghan Markle for a new life across the pond, opened up about Megxit to TV host James Cordon on The Late Late Show.

Harry said: “It was never walking away.

“It was stepping back rather than stepping down.

“It was a really difficult environment, as I think a lot of people saw.

“We all know what the British press can be like, and it was destroying my mental health.

Harry added: “So I did what any husband and what any father would do – I needed to get my family out of here.

Harry admitted they “went from zero to 60” in the first two months of their relationship.

He also rapped the theme song to the 1990s sitcom The Fresh Prince Of Bel-Air and told how the Queen bought his son Archie a waffle maker for Christmas.

The Duke and Duchess of Sussex quit as working royals in March 2020.

Since then, they have bought an £11million mansion in Montecito where they are living with their young son Archie.

The couple, who are expecting their second child, have signed lucrative deals with Netflix and Spotify as they launch new careers.

Former actress Meghan and Harry are giving a televised interview to Oprah Winfrey which airs on CBS on March 7.

Last week, it was confirmed that Megxit would be permanent.

The Sussexes have been stripped of their royal patronages and Harry has lost his beloved honorary military titles.