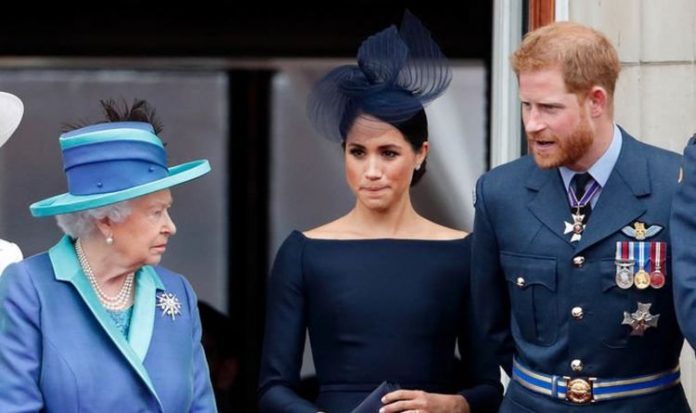 The rift between Prince Harry and Prince William could be further widened by the Duke and Duchess of Sussex’s decision to do a sit-down chat with Oprah, according to royal commentator Rebecca English. Speaking about the possible impact on the relationship between royals from both side of the pond following Meghan and Harry’s choice to do their first interview as non-working members of the Royal Family, Ms English said: “The decision to take part in the interview risks angering – and embarrassing – the Royal Family.”

Speaking about the widely reported split between the Sussexes and Cambridges, Ms English wrote in the Daily Mail: “It could also widen the divisions between Harry and his brother, Prince William, and William’s wife, the Duchess of Cambridge.”

US network CBS took the world by storm yesterday evening when it announced the Sussexes are to record an interview with the popular TV host.

According to its statement, the CBS Primetime Special featuring Oprah and the royals will be split into two sections, with Meghan being interviewed alone at first and later joined by Harry.

The “intimate conversation”, to air on March 7, will cover a wide range of topics, with Meghan speaking about “stepping into life as a royal, marriage, motherhood, philanthropic work” as well as “how she is handling life under intense public pressure”, CBS said.

With her husband, Meghan will also discuss “their move to the United States and their future hopes and dreams for their expanding family”, the network added.

It isn’t clear whether the Queen was consulted by the Sussexes before they took the decision to sit down with Oprah.

A royal source, however, said Meghan and Harry are no longer required to discuss similar plans with the palace given they have stepped down as senior royals almost one year ago.

READ MORE: Prince Harry to be ‘bumped off’ Royal Family line of succession

The insider said: “The Duke and Duchess are no longer working members of the Royal Family and therefore any decisions they take with regard to media commitments are matters for them.

“As non-working members of the Royal Family they are under no obligation to inform the Royal Household of such plans.”

Prince Harry and Prince William have been reportedly involved in a months-long feud which strained their once-close relationship.

While Prince William never discussed publicly claims of a rift, the Duke of Sussex admitted in an interview with Tom Bradby he and his brother were “on a different path”.

Speaking during the royal tour to South Africa, Harry said: “Part of this role and part of this job and this family being under the pressure that it’s under.

“We don’t see each other as much as we used to because we are so busy.

“But I love him dearly. And you know the majority of stuff is created out of nothing.

“But as brothers, you know, you have good days, you have bad days.”

This feud was exacerbated by Meghan and Harry’s announcement they wanted to step back as senior royals in January last year, royal expert Katie Nicholl has previously said, claiming the Duke of Cambridge was so angry at his brother he did not want to have lunch with him, their father and grandmother ahead of the summit in Sandringham to discuss the Sussexes’ exit terms.

However, Ms Nicholl said their relationship has since improved and the Sussexes and Cambridges have been in touch during the festive holidays.

She told True Royalty TV last month: “That is how bad things were but then you fast forward a year and look at now, they spent the holiday season in touch and presents were exchanged.