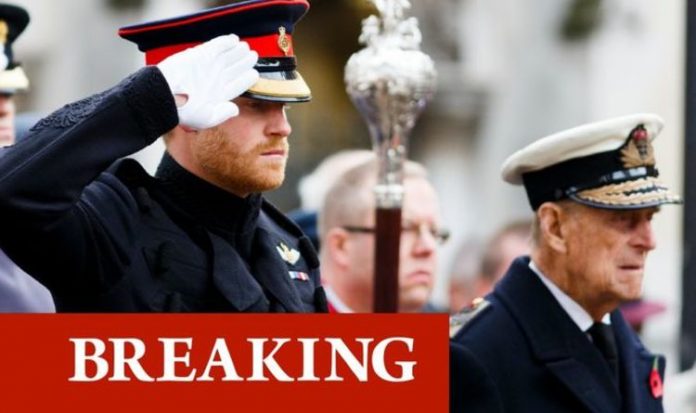 The Duke of Edinburgh, 99, is spending a third night in hospital after being admitted on Tuesday. Harry, 36, is reportedly self-isolating at home with pregnant Meghan Markle, 39, and their young son Archie in case he needs to return to Britain.

The Mirror cited a source as saying Harry has made arrangements to fly by private jet and is being kept “regularly informed” of his grandfather’s condition.

It is understood the royal would be tested before leaving the US and upon entering the UK.

A source said: “Harry is of course concerned for his grandfather’s welfare and is being kept regularly informed on his condition.

“He has chosen to stay in case he is required to return to the UK at short notice.”

But members of the Royal Family have a special dispensation to travel meaning Harry – who quit royal duties with his wife last March for a new life in America – would not have to do this.

Philip was described as being in “good spirits” after he was admitted to the private King Edward VII’s hospital in central London for an undisclosed reason, although it is not coronavirus-related.

It is understood the Duke was taken to hospital by car, where he walked in unaided as a non-emergency admission.

It is understood the decision to admit Philip was taken with an “abundance” of caution.

Royal expert Penny Junor joked that medics probably “would not want him” on their shift due to his aversion to people “fussing over him”.

The royal author told BBC Breakfast: “I think he can be quite blunt and I think if he felt people were fussing over him he could be quite outspoken about that.

In December 2019, Philip spent four nights in hospital where he was treated for a “pre-existing condition” before being discharged on Christmas Eve.