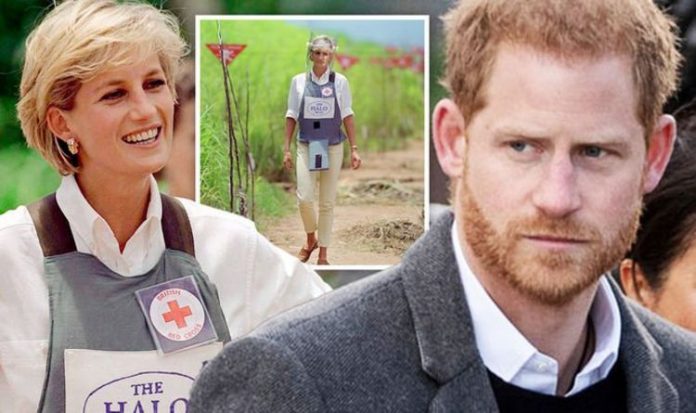 Harry has committed much of his work under the Royal Family to charitable causes. The Prince has focused his efforts on helping charities related to children and young people, carrying on his mother’s legacy in the UK and around the world. Princess Diana used her status and power to shed light on organisations and humanitarian crises, especially in Africa, that were severely underfunded and appeared at a loss.

In 1997, shortly after her divorce from Prince Charles, Diana was photographed famously walking through minefields in Angola.

She harnessed her publicity as the world’s most famous woman at the time to call on an international ban on landmines – this trip largely credited with boosting the campaign for a global landmine treaty signed later that year.

In 2006, Harry formed Sentebale, based in Lesotho, Africa, which means “Forget me not”, supporting children and families plagued by HIV and extreme poverty – an honour to Diana.

Harry reflected on the impact his mother had had on both him and the world in a 2016 interview with ABC News, talking about her “special gifts” to people.

He said: “We will do anything we can to make sure she’s (Diana) never forgotten and carry on all the special gifts that she had that she portrayed when she was alive.

“I hope that a lot of my mother’s talents are shown in a lot of the work that I do.

“Weirdly, this wouldn’t be my first time going to Florida.

“I ended up going with her – it’s one of my very happy memories, I went on space mountain 14 times, it was absolutely fantastic; the best thing ever.

JUST IN: BBC’s Bashir has forfeited his right to respect, say ANN WIDDECOMBE

Harry and Meghan Markle visited South Africa last year, the royal tour largely credited with speeding up their fallout from the Firm.

Here, Harry followed in Diana’s footsteps, walking through the same minefield she had 22 years before.

Wearing body armour, he also visited a partially-cleared minefield nearby and set off a controlled explosion.

Tragically, Diana never lived to see the full impact of her visit.

She died later that year, before the international treaty to outlaw minefields was signed.

Walking through the now bustling streets of Huambo that were once filled with lethal explosives, Harry said it was “quite emotional” to retrace Diana’s steps and “and to see the transformation that has taken place, from an unsafe and desolate place into a vibrant community of local businesses and colleges”.

He added: “Without question if she hadn’t campaigned the way that she did, this arguably could still be a minefield.

“I’m incredibly proud of what she’s been able to do, and meet these kids here who were born on this street.”