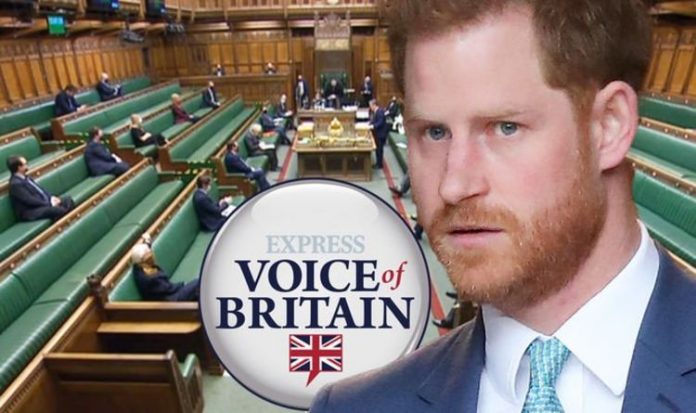 An Express.co.uk poll – which ran from 1.30pm yesterday to 7am today – asked: “Should Parliament remove Prince Harry from the line of succession?”

The poll received 10,176 votes and a staggering 93 percent (9,474) urged Harry to be removed from the line of succession.

One person said: “The Queen must take every step necessary to prevent Harry, and his wife, from ever having any possibility of influence within our Royal Family.”

Poll results show Harry should be cut from line of succession (Image: Express)

Another added: “Over 90 percent agreed in the poll.

“Heaven forbid if all William’s family passed away, Harry and the anti-establishment person would be next in line.

“It’s imperative this serious situation must be addressed by the Government sooner rather than later.”

Someone else said the monarchy has to be “protected for the future of UK” at all costs.

They said: “The monarchy has to be protected for the future of UK at all costs.

“Harry may be HMQ’s grandson, but the monarchy belongs to UK and its people.

“It would be disastrous not only for UK, but for the Commonwealth as well if it ever transpired that harry became king.

“He would not be king – mm would, and that would be the end of the world as we know it.”

Another person said the Queen’s first duty is “to her country” and must take “necessary steps to protect Great Britain’s future”.

Someone else said there would be “riots” if Harry got anywhere near the throne and urged “Parliament should take it out of the Queen’s hands”.

Only Parliament can remove a royal from the line of succession, with even the Queen not possessing the power to do it herself.

In 1936, King Edward VIII decided to give up the throne to marry his lover, American socialite Wallis Simpson.

While this crisis stemmed from a personal decision, it needed an act of Parliament to sanction a critical change in the line of succession.

Edward VIII signed his declaration of abdication on December 10 1936 and George VI – the father of Queen Elizabeth II – was put on the throne.

Both Houses in Parliament passed His Majesty’s Declaration of Abdication Act on the following day without any amendments.

Earlier this month, Meghan and Harry told the Queen they would not be returning to the Firm after their one-year review period.

Meghan Markle and Harry to not return as working royals (Image: Splash)

In response, the Queen stripped Meghan and Harry of their royal patronages as the pair could not continue with the “responsibilities and duties” which come with a life of public service.

Under their current deal with the Queen they still retain their HRH titles but do not use as non-working members of the Royal Family.

A spokesperson for Harry and Meghan added: “As evidenced by their work over the past year, the Duke and Duchess of Sussex remain committed to their duty and service to the UK and around the world, and have offered their continued support to the organisations they have represented regardless of official role.