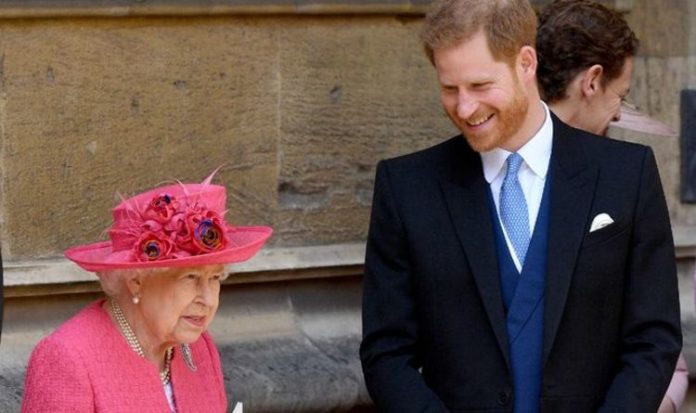 The Queen is the royal that Prince Harry spends the most time “talking to”, according to commentators. The “close relationship” between the grandmother and grandson was analysed following the Duke and Duchess of Sussex’s announcement that they are expecting their second child. ITV Royal Rota podcast hosts Chris Ship and Lizzie Robinson discussed how the Royal Family had been notified about the new baby.

Mr Ship told listeners: “The family did know in advance, the Queen was told in advance.

“Actually, from everything I hear, Harry does talk to the Queen more often than he does any other members of his family in the UK.

“His granny is the one person he spends a lot of time talking to.

“So the Queen was told in advance, but I don’t think Buckingham Palace were expecting the statement to come out on Sunday night.”

Ms Robinson added: “I think we got the sense that they perhaps hadn’t been told in advance when it was going to be announced because that statement wasn’t ready to go.

“I think it was because it actually wasn’t meant to come out on Sunday night, but leaks changed the schedule.

“Interesting you talk about Prince Harry’s relationship with his grandmother, the Queen.

“That close relationship means he is not going to want to let her down.”

Buckingham Palace said that the Queen, Prince Philip, Prince Charles and the rest of the royals are “delighted” with the news.

They also sent their “well wishes” to the couple.

No due date has been provided as of yet.

Depending on the arrival, the new baby will be the Queen and Philip’s 10th or 11th great-grandchild.