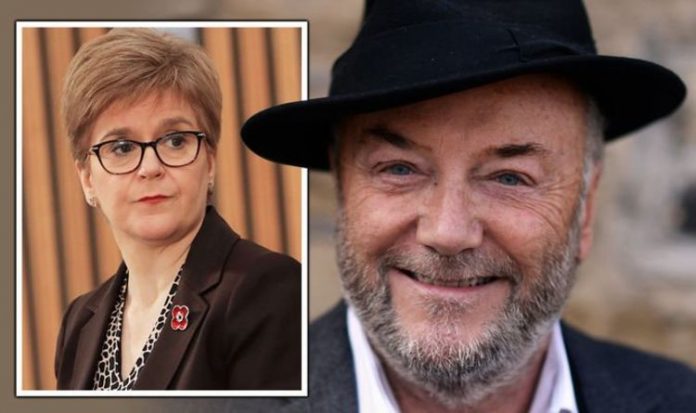 Ms Sturgeon is under growing pressure to explain why the Scottish Parliament redacted swathes of Mr Salmond’s written evidence 16 hours after it was published on its official website. In his evidence, Mr Salmond alleged Ms Sturgeon had broken the ministerial code and also named people he claims were involved in a “malicious and concerted” attempt to remove him from public life.st year.

The decision to redact the evidence was condemned by former MP George Galloway who is a fierce critic of Ms Sturgeon’s SNP and its bid for Scottish independence.

Mr Galloway tweeted: “I urge all decent supporters of Independence to join the rest of us in demanding this: #ResignSturgeon.”

Another critic tweeted: “All done in plain sight as well which is sinister enough in itself.

“She will have the gall to put it down to an ‘oversight’ you wait and see.”

Another said: “This is so outrageous. It’s beyond anything we’ve ever witnessed in politics in UK!”

One furious voter said: “Whether you’re a unionist, or an indy you surely can’t ignore the wilful corruption being played out here.”

And another tweeted: “Independence is not worth the soul of Scotland.”

Scottish Labour MSP Neil Findlay called for a cabinet minister to appear urgently to answer questions about a “crisis of credibility” over the saga.

And Mr Salmond’s lawyers have demanded legal justification for the decision and warned it had jeopardised his planned appearance before a Holyrood committee tomorrow.

The evidence stated: “Underlying all of this and perhaps the most serious issue of all is the complete breakdown of the necessary barriers which should exist between Government, political party and indeed the prosecution authorities in any country which abides by the rule of law.

“I leave to others the question of what is, or is not, a conspiracy but am very clear in my position that the evidence supports a deliberate, prolonged, malicious and concerted effort amongst a range of individuals within the Scottish Government and the SNP to damage my reputation, even to the extent of having me imprisoned.”

This resulted in £512,250 in legal costs being paid out to Mr Salmond’s lawyers.

Mr Salmond was separately acquitted of all 13 charges including sexual assault, attempted rape and indecent assault following a trial at the High Court in Edinburgh last year.