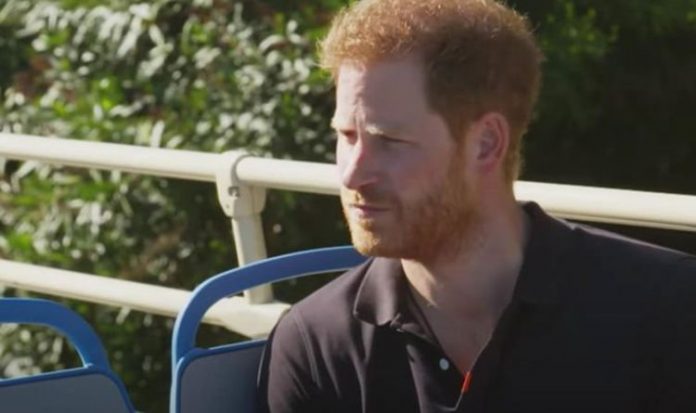 Prince Harry on when he knew Meghan was ‘the one’

Royal commentator Richard Fitzwilliams lashed out at the Duke of Sussex for “making a fool of himself” on The Late Late Show with James Corden. The royal expert wrote on Twitter: “What the hell is going on?

“How can Harry appear on a chat show and make a fool of himself like this.

“This is the silliest royal appearance since Its a Royal Knockout in 1987.

“He talks about serious issues in a ridiculously silly way. Demeaning. Really sad.”

In a second tweet, Mr Fitzwilliams also branded the script of the special episode “puerile” and Harry’s appearance “nauseating to watch”.

Prince Harry news: Prince Harry has been criticised for appearing in the show with James Corden (Image: THE LATE LATE SHOW WITH JAMES CORDEN)

Prince Harry news: Prince Harry ‘made a fool of himself’ during the show with James Corden – expert (Image: THE LATE LATE SHOW WITH JAMES CORDEN)

Mr Fitzwilliams was joined in his criticism of Harry’s appearance by other royal watchers.

Many noted this episode of the late show, recorded in early February, was released just hours after the Queen made an impassioned appeal to Britons to get vaccinated.

Royal author Phil Dampier wrote on Twitter: “As the Queen urges us to think of others Prince Harry prances about in LA and makes the absurd claim that he hasn’t walked away from the royals.

“What planet is he on? Hollywood I suppose.”

Richard Eden, the Saturday Diary editor at the Daily Mail, said: “There couldn’t be a starker contrast this morning than the Queen urging people to do their duty while Prince Harry, the Fresh Prince of Bel-Air, larks around in Hollywood.”

Mr Eden’s message was retweeted by royal commentator Angela Levin, who added: “It shows how unconnected he is with British life.”

Royal expert Robert Jobson also said: “The Queen’s important message to the nation about getting the COVID-19 vaccination now clashes with revelations that Prince Harry has filmed another chat about his personal life with James Cordon on US TV.

“It’s not about content but the poor timing. Coordination would help!”

Prince Harry news: The interview with James Corden was released shortly after the Queen urged Britons to get vaccinated against coronavirus (Image: ROYAL FAMILY)

Different royal households usually coordinate the public appearances of their members to make sure they don’t overshadow one another.

However, the Duke and Duchess of Sussex are no longer senior members of the Royal Family required to inform the Royal Household about their plans and don’t have an office at Buckingham Palace anymore.

A Buckingham Palace source laid bare the new relationship between the Sussexes and the Royal Family earlier this month, after US broadcaster CBS revealed Meghan and Harry were to take part in a 90-minute interview with Oprah Winfrey.

They said: “The Duke and Duchess are no longer working members of the Royal Family and therefore any decisions they take with regard to media commitments are matters for them.

“As non-working members of the Royal Family they are under no obligation to inform the Royal Household of such plans.”

Moreover, Prince Harry may not have had a say over when to air this episode of the Late Late Show with James Corden.

During his chat with the TV host, Harry opened up on his feelings for Megxit, saying “it was stepping back rather than stepping down”.

He added: “As far as I am concerned, whatever decisions are made on that side, I will never walk away, I will always be contributing.

Prince Harry was also asked by Mr Corden what he expects life to be like now that he has relocated to California and what he is excited for it to be after Megxit once lockdown is over.

He answered: “I have no idea, a slightly different version but a continuation of what we were doing back in the UK anyway.