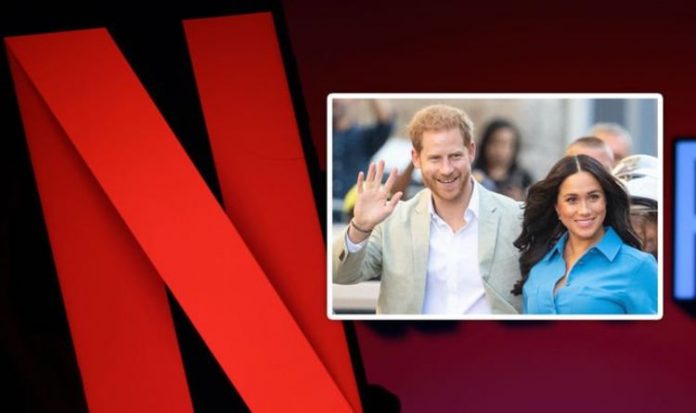 The Duke of Sussex and Meghan Markle signed a multi-million dollar deal with the streaming giant earlier this year, with the couple taking on production roles. Netflix has also enraged Buckingham Palace insiders over their depiction of the Royal Family in their show The Crown, which in its fourth season looks at Princess Diana and Prince Charles’ relationship. Now analysts have called on Harry to abandon the deal with the streaming company because of the royal anger.

Writing in the Mail on Sunday columnist Emily Andrews shamed Harry for his ties to Netflix amid royal uproar at the company.

She said: “Never before have members of her own family been associated with those ‘trolling’ the Monarchy. The unedifying impression is that, by having signed a deal with Netflix, Prince Harry and his former Hollywood star wife Meghan are seen to be lavishly benefiting from the company’s distortion of the truth about the Royal Family.

“Their reported $100 million (£78 million) deal with the US streaming giant will help give Harry financial freedom but it has raised eyebrows back home – particularly among those close to Charles and William.

“How can he take money from a company that traduces his family? That unfeelingly recreates the Irish terrorist bomb that killed Lord Mountbatten and three others? That mawkishly picks over the carcass of Harry and William’s parents’ bitter marriage break-up like a vulture?”

It came after royal insiders savaged The Crown and Netflix over their depiction of royal events.

One insider said the Royal Family were quizzical at why the Duke was tied to the company producing a show that portrayed his mother in a poor light.

They added: “There are raised eyebrows about Harry taking millions from the company that’s behind all this.

“After all where do much of Netflix’s profits come from? The Crown.”

Harry and Meghan’s multi-year deal is reported to be worth around £112 million, and has allowed them to pay off repairs to Frogmore Cottage and live independently.

The couple are said to be looking to produce docuseries, feature films, scripted shows and children’s shows, with Meghan not acting in any of the programmes.

“They’re smart—they were shopping it around across all of the major companies, and I think we really put together the best complete package, and we’re going to do a wide range of entertainment with them.”

Ms Andrews also claimed in the column that Meghan and Harry pitched video footage of their exit from the Royal Family to Netflix to secure the deal.

Previous reports said the Sussexes were planning on launching a “reality show”, which representatives for the couple have strongly denied.

But royal author Robert Lacey said to Express.co.uk: “That is slightly disingenuous, they have denied doing a reality show but not a documentary.

“That would finally break the taboos, it could be impossible for them to come back.”