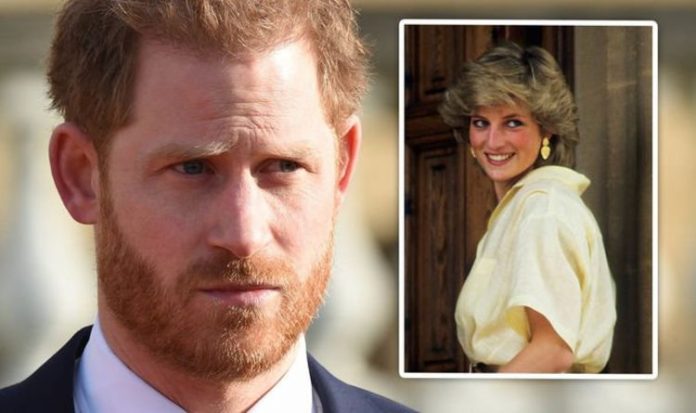 The deal struck by Meghan Markle and Prince Harry with Netflix has given the Duke of Sussex a new chance to speak out against Diana: A New Musical, according to Ken Wharfe. The controversial musical has raised eyebrows among a few royal fans and commentators for the portrayal of Princess Diana as well as other members of the Royal Family.

Mr Wharfe, who has yet to see the musical, believes Prince Harry is now in a position to call Netflix to account should he not like how his beloved mother has been represented in the Broadway show.

He told : “The Diana musical, soon to be premiered on Netflix, presents a huge dilemma to them both.

“If the critics are to be believed, this musical story is not a joyous journey of love with a happy ending but an episodic account of untruths, scandal and sex.

“Harry loved his mother dearly and has spoken of her in such loving detail recently.

“He now has the chance, irrespective of his lucrative deal with Netflix, to stand alone from his wife and make clear his abhorrence of such a musical and call Netflix to account.

“If he were to do this, his fading popularity would be guaranteed a huge resurgence.”

The musical focused on Diana previewed in Broadway in March, but the arrival of the coronavirus pandemic prevented the general public from seeing the show.

The musical, to be recorded this month at a New York theatre and broadcasted next year, portrays Princess Diana and Prince Charles having extramarital affairs.

It also features angry remarks by the monarch addressed to the late Princess of Wales.

During a meeting between Queen Elizabeth II and Diana in which the former agrees the Prince and Princess of Wales should divorce, US theatre star Judy Kaye, playing the British monarch, says: “In the old days we would have chopped off your head.”

Royal expert Dickie Arbiter, referring to some reviews on the musical, recently branded the show “a bit tacky”.

Appearing on Good Morning Britain he added: “I think it’s a great pity to have a musical on a tragedy.”

He continued: “It’s quite interesting the LA Times said the royal purists will be upset by it – won’t be able to stomach it.

“But [they added] at the end of the day it’s tongue in cheek, bordering on silliness and shouldn’t be taken seriously”.

Mr Wharf’s appeal to Prince Harry comes after Meghan and Harry confirmed they signed an agreement with Netflix.

According to their new multi-million deal, the Duke and Duchess of Sussex, who have founded a production company yet to be named, will create documentaries, films, scripted and children’s shows exclusively for the streaming giant.

While both the representatives of the Sussexes and Netflix have remained tight-lipped on how much this deal is worth, experts said it could range between $50 to $150 million.

Speaking about their new agreement with Netflix in a brief statement, Meghan and Harry said: “Our focus will be on creating content that informs but also gives hope.